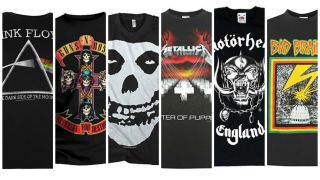 The BBC have launched a poll to decide the greatest band t-shirt of all time. The poll is to mark the annual Wear Your Old Band T-Shirt To Work Day, which this year takes place on November 27 and has been running since 2008. The winning t-shirt will be put on display at the London Design Museum.

“T-Shirt Day was originally aimed at finding an excuse for music fans to unearth one of their old band T-Shirts and wear it to work for a day,” says 6 Music’s Steve Lamacq, ”a bit like a badge of musical honour, which we thought might be fun because there are so many stories surrounding these shirts. What’s been brilliant, though, has been seeing the terrific array of band’s names being paraded on the day; old and new groups, some of them quite obscure. And sure enough, they all have a tale behind them.

“Over the past couple of years the day has now started becoming a bigger celebration of music-related T-shirts, saluting the designs and logos and the slogans, many of which have either ended up being quite iconic or deliberately notorious. That’s why this year we’ll also be attempting to crown the most popular or influential T-Shirt of all time with a vote among our listeners.”

The vote launches today, while the winner will be announced by Lamacq during his show on T-Shirt Day itself.