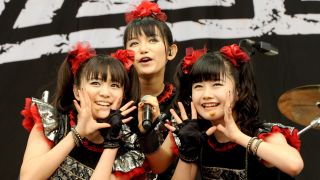 Babymetal are set to star in an animated series which will see them try to “save the day” as the “magical world of heavy metal music” comes under attack.

The as-yet-untitled series is being produced by Warner Bros’ digital studio Blue Ribbon Content in partnership with Amuse Group USA and is described as a “hybrid live-action and animated project.”

“We are huge fans here at Blue Ribbon Content and are extremely excited to help bring the Babymetal phenomenon to US audiences through this upcoming digital series.”

It is not yet clear where the series will be broadcast. It is produced with the help of Babymetal manager Key Kobayashi, aka Kobametal.

The official description of the series reads: “The action-adventure will take viewers inside the magical world of heavy metal music as it comes under attack, and one lonely god, Kitsune, forms the warrior band Babymetal to save the day.

“In the series, Su-Metal, Yuimetal and Moametal join together to ultimately redefine the genre. The series will also feature new live-action performances from the group, who will enter the animated world through a secret portal.”

The Japanese trio’s second album Metal Resistance was released in April of this year. They played two nights at the Tokyo Dome this month and will support the Red Hot Chili Peppers in the UK in December.

10 of the best metal bands from Japan