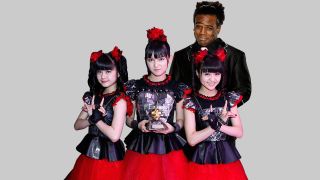 Alright, so you’re probably thinking “Who is this random guy and why is he on Metal Hammer?!”. Well my good man and/or woman, I am WWE Superstar (meaning I punch large men in the face on a regular basis) Xavier Woods aka Austin Creed. I have not one but two degrees, slowly but surely working my way towards a PhD, and I have a gaming channel on YouTube called UpUpDownDown. But most of all I absolutely love metal!

My favourite thing about metal is how it brings people together from all walks of life. I think that there was a time when enjoying metal meant that you looked a certain way or were a certain type of person, but over the years I feel like the community has changed for the better and metalheads now come in all shapes, sizes, and colours. This is why I love metal. But enough of my rambling, I’m here to tell you my top five Babymetal songs – so let’s go!

This is heavy, fast, and everything that a metal song should be. It really makes me feel like I’m listening to Extol (my favourite metal band) with a sweet Japanese twist. These are the kind of dystopian vocals that make me visualise the final battle between rival post-apocalyptic territories. Essentially, if I was Mad Max this is what I would use as my battle song when I went to take Bartertown from Master Blaster.

5) Tales Of The Destinies

This quickly changes vibes all through the song. It’s almost as if it’s a fight between light and dark, which is a really cool side-effect while listening. Neither side is overbearing and you get a really good feel of how the three vocalists are doing more than just singing; they’re using their voices as instruments that intertwine perfectly with the guitars and drums as if they are somehow connected. It’s a weird, awesome battle of harmonies that takes you on a ride for five and a half minutes.

I love anime and this sounds like a song from Gundam Wing! It starts off as a super poppy anime-esque jam, but then evolves into a short rap song, and then to a heavy metal banger. Near the end it comes back round to the beginning and mixes all the styles all together. As a whole it’s one of Babymetal’s most complete songs as it’s able to successfully use so many influences and still be coherent. One hell of a jam.

A Japanese metal ballad. What?! That’s not a sentence you ever thought you would hear. This song shows the incredible range that Babymetal have as a whole, and it’s a much lighter jam than some of their other songs. It’s soft and soulful, which isn’t what you normally get from them, so it’s good to know Babymetal wear more than one hat. It really helps you appreciate them even more.

2) The One (English version)

This is quite possibly one of the most inspirational and epic songs I’ve ever heard in my life. It makes me feel like I’m a superhero who’s about to go break a villain’s neck – there would be lots of looking to the horizon and walking away from explosions like I’m the man. But there’s something about a cute Japanese girl singing an epic melody to me in English, it’s just good for your soul.

Once the first note of this song hits then you know it’s on. I love speed metal that’s played well and this is played with deathly accuracy. The girls sound incredible. Aoyama Hideki is killing it on the drums – that double bass! It has everything that I love about Babymetal and metal in general. This song rolls all of their good qualities into one piece and if you haven’t heard it then go listen to it. LISTEN TO IT NOW!