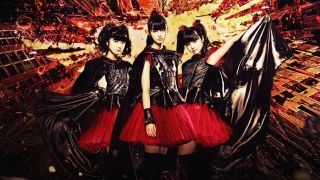 What’s the best thing that Japan has ever given the rest of the world? No, it’s not Pokemon Go, you silly sod. It’s heavy music that somehow manages to tick all the most desirable boxes while also being madder than a wolverine with its balls caught in a barbed wire fence. With the country’s metal scene now more prominent than ever before, many metalheads are digging into its many skull-shattering delights for the first time, which probably means that we should help out and point you all in the right direction. Thus, here are ten of the very finest Japanese metal bands. We’re too good to you, if anything.

Although generally regarded as a hardcore punk band, G.I.S.M. have always had plenty of metallic oomph in their sound. More importantly, since forming in Tokyo in 1981 they have been hugely influential on all manner of underground acts, thanks to undeniably vicious and bizarre records like classic 1983 debut album Detestation and the remorselessly unpredictable behaviour of legendary frontman Sakevi Yokoyama. Earlier this year, the band reformed after a near-14-year hiatus and performed their first ever show outside of Japan at Roadburn in Tilburg, Holland. It was fucking insane.

Named after the opening track from The Melvins’ 1991 album Bullhead, Boris have been doing strange and captivating things to heavy music for over two decades. Variously a balls-out heavy psych band, avant-garde doom experimentalists and noise-rock nutjobs, they have amassed a huge and diverse catalogue of speaker-mincing releases, pursuing a devout analogue course and never being any less than utterly distinctive and fascinating, whether on their own records – check out 2005’s recently reissued Pink double set for a comparatively accessible entry point – or in collaboration with the likes of Sunn O))) (2006’s surreal dronefest Altar) and Merzbow (this year’s mind-crunching Gensho).

Japan has produced a great number of outstanding grindcore bands over the years, but only one of them is called Bathtub Shitter. Masters of filthy, brutal and fervently obnoxious sonic chaos, the Osaka quartet tend to write songs about either politics or, erm, shit, drawing from classic grind, sloppy death metal and primitive thrash and delivering everything with a bug-eyed zeal that few of their peers could credibly emulate. Other Japanese grind bands like 324 and Final Exit may be faster and more precise, but Bathtub Shitter are a) heroically deranged and b) called Bathtub Shitter. Quite why you’d need extra reasons to listen to them is anyone’s guess.

Imagine a band that sounds like a bomb going off in a toy shop. Actually, don’t. Melt Banana already exist so there’s no need. Somewhere between nuts-out grindcore, bug-eyed art rock and the gibber-inducing insanity of left-field jazz titan John Zorn’s Naked City project, these Tokyo terrors have been making a heroically subversive and bewildering racket since 1992, earning themselves a devoted fan base that has included Mike Patton, Napalm Death and the late, great John Peel along the way. Thanks to the crazed yelping of vocalist Yasuko Oniki and the fact that their songs rarely outlast the two-minute barrier, Melt Banana are the perfect band for those with a short attention span and a yearning for dizzying song structures and lyrics that make no sense whatsoever. They’re fast, they’re furious and they once toured the US with Tool, which must have left quite a few mainstream alt-rock fans screaming into their pints with terror.

If any band deserves to be credited with bringing Japanese metal into the spotlight on this side of the world, it’s Mad Capsule Markets. Mad-eyed ingénues with a penchant for mixing anything and everything into their high-energy digi-metal brew, the Yokohama mob scored a significant international breakthrough with 1999’s Osc-Dis album, which enabled them to tour properly overseas for the first time. A wild blend of industrial metal, gnarly electronica and insistent punk melody, it plainly paved the way for the likes of Babymetal and Crossfaith and still sounds utterly bonkers and futuristic today.

The self-proclaimed “most evil band in Japan” are cult heroes and proud purveyors of what they call “street metal”: a furious blend of black and thrash metal that suggests that Abigail wouldn’t know compromise if it bit them on the arse. Renowned for their lyrical deviance and obsessions with war, Satan and death, they have been making a hideous racket in Tokyo’s darkest shadows since 1992 and have a phenomenal catalogue of underground releases to their credit, including countless EPs, splits and limited edition vinyl efforts. Virtually all of it will take your face off, but this year’s new studio album The Final Damnation is as good a place as any to get a first taste of their seminal, misanthropic din.

Okay, so lots of people are still a bit confused about exactly how Babymetal have evolved into one of the hottest bands on the planet, but the fact remains that no one has ever done more to push Japanese metal into the mainstream. The undeniable reality that they have annoyed as many people as they have delighted is arguably just another reason to love them, and even if their mind-bending hybrid of shiny J-pop and bludgeoning modern heaviness makes you really angry… well, they’re not going anywhere. Oh, and you’re wrong. Babymetal are ridiculously entertaining.

More than heavy enough to qualify as a metal band, but more firmly rooted in the strange world of experimental noise rock than anything more traditional, Zeni Geva have been blowing minds and destroying eardrums for nearly 30 years. One listen to their classic 1989 album Maximum Love And Fuck should be enough to convince you that you need much, much more of their music in your ears, but thanks to their brilliantly unpredictable catalogue, the band led by underground icon KK Null are already revered by eclectic weirdos worldwide. They haven’t released a new album since 2001’s 10,000 Light Years, which came out on Neurosis’ Neurot Recordings imprint, but it seems a safe bet that somewhere in Tokyo there is a really terrifying and wildly original racket being made. Hats off.

While some rock pundits were desperately trying to convince us all that we should be listening to more pointedly cool Japanese bands like Dir En Grey – who are, to be fair, occasionally intriguing – more sensible folk were banging their heads to the frankly colossal Sabbathian riffage of Shinjuku riff lords Church Of Misery. Dedicated purveyors of serial killer-themed doom metal that swings like a mammoth’s hairy bollocks, the band’s eccentric but somehow oddly authentic take on the stoner metal template has resulted in some of the most wonderfully crushing records of the last 20 years. A stunning live band, they have built their reputation on an unerring ability to pen riffs that will turn your bowels to liquid. But in a good way. Hail the Church!

There are many more successful Japanese bands than Sigh, and if you’d rather listen to the stadium-sized X-Japan then you’re perfectly welcome, but if anyone sums up the gloriously unhinged essence of the country’s heavy music scene, then Mirai Kawashima’s shape-shifting extremists are undoubtedly it. Initially a very odd black metal band, they have spent the last 27 years making deeply peculiar and relentlessly spellbinding records that are as demented and psychedelic as anything else the underground has conjured. Veering from lysergic speed metal to explosive bursts of malevolent prog rock, their refusal to adhere to anyone’s rulebook has made them one of the most respected underground bands on the planet. But don’t be fooled by their cult status: Sigh make mesmerising and deceptively accessible records that boast more ideas per song than most other bands will manage in a lifetime. If you fancy some genuine heavy metal madness, there really is no competition.

10 of the best metal bands from France