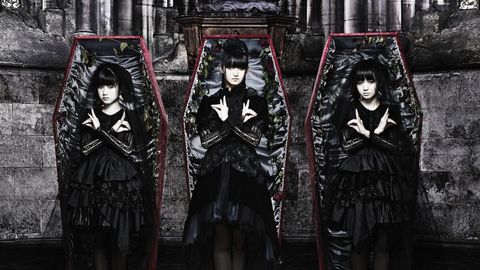 Seeing as there is nothing a metalhead loves more than to argue over what is and what is not metal, Babymetal are a gift from the (fox) gods, no matter where you stand on them.

Of course, if you’re going to hold three young girls formation-miming their love of chocolate to the same light you’d hold Behemoth then the chances are you’re somewhere on the response spectrum between exasperated and enraged, sick of having the term ‘metal’ co-opted by people who have never shown a moment’s interest in the genre’s rich lineage, and now having to watch that process get taken another step too far by an explicitly manufactured band. That sings about chocolate.

If, however, you look at Babymetal as a bizarrely entertaining take on metal through the lens of Japanese pop culture – one that’s remarkably adept at mimicking the surface aspects of any style it chooses, freeing it from any historical context and fashioning it into something superficial, pristinely present tense, playful and singularly vivid – you may just see the music you love in a weird and wonderful new light./o:p

It’s also been in keeping with the whole, hyperreal experience that is Babymetal that all the debates haven’t had much evidence to centre around – the fact that their album has only been available up on import until now accentuating the sense that they’re from another world, with only a few YouTube videos and the gleefully bounce-inducing Sonisphere and Brixton shows to go on. But now with the full UK release, Babymetal are firmly in our midst, and everyone should start adjusting their mindsets now./o:p

As anyone who loves Manowar, Immortal, Devin Townsend, Angel Witch or any band who believes that heavy metal finds its true expression beyond the confines of the mundane will readily attest, absurdity is hardly a foreign concept in our world, and Babymetal doesn’t stand or fall on how heavy it is (and very often it is very heavy), but how much it liberates that impulse, and here it runs amok.

For anyone who still thinks Babymetal are a cynical marketing exercise, the first three tracks of their album at the very least are going to prove problematic, because if any release this year can kick off with such irrepressible energy, unself-conscious invention and taste-hacking joie de vivre, you should marry it. Opener, Babymetal Death’s pomp-infused intro is pummelled by juddering, industrialised grooves and driving riffs that wouldn’t sound out of place on a Monolith Deathcult album, as Su-metal, Yuimetal and Moametal’s quizzical interjections are more like cleverly placed samples.

Megitsune’s flurry of orchestral punches and hyperactive relayed vocals (and they can really sing) escalate into bewildering, synapse-petrifying state of ‘Let’s Go!!!’ exhilaration before descending into juddering subdrops and kicking off again. The staccato vocals on Gimme Chocolate would be immediately recognisable to any fan of cult Japanese outfit Melt-Banana, and if Line!’s adrenaline-crazed, world’s-worst-nightclub pulse sounds too cutsey, somewhere in the back of your head, it’s also a new national anthem for Wreck It Ralphs’s neighbouring Sugar Rush, albeit one that suddenly switches between loping gangsta rap and massive must-destroy riffs.

Doki Doki ✩ Morning is part Saturday-morning-TV mania, part ‘Le-e-e-e-vel UP!!!!’ videogame reward interlude and part riff behemoth, and if you’ve gotten this far, odds are you’ll be in the one, decentred headspace where such exhilarating nonsense makes some kind of sense.

Ironically, those most likely to ‘get’ Babymetal aren’t fans of Falling In Reverse and Black Veil Brides, so much as those at the more power/Eurometal end, which is why Road Of Resistance’s collaboration with Dragonforce isn’t entirely incongruous.

This is an album that, in its own technicolour way, is a celebration of something giddy and heedless that resonates with the metal world’s wilder impulses. You’ll enjoy Babymetal at your peril, but then surely that’s all the more reason to do it./o:p

Briefly one of the most talked-about names on the metal underground, Tokyo’s corpsepainted and bullet-belted trio hit their sonic peak with this harrowing simmering of doom, crust and black metal down to a rudimentary rumble that blew minds and scorched souls.

Flagitious Idiosyncrasy In The Dilapidation: Wallow - 2013

Using a random approach to band-naming not unknown in their home country – or their chosen grindcore field – this unassuming-looking four- piece specialise in a gritty, grimy DIY clatter that sounds like dishevelled cats fighting – in a good way.

Japanese metal’s biggest camps are grindcore and, at the opposite end of the spectrum, classic and showy heavy and power metal. The glammy-looking Iron Maiden and power ballad-loving Destrose are one of the best bands of the bunch, with some heavy-ass riffs to boot.

Not a metal band, but the veteran pop-punk group do have their roots in garage rock and grunge, and their wry take on decades of alternative culture skimmed genres and mined them for deceptively simple hooks that made them a worldwide, alternative sensation./o:p