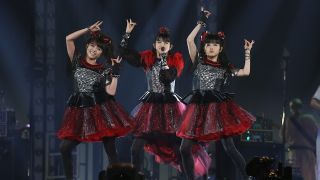 I went to Japan to do promo for Sinsaenum, and had the smart idea to ask the label to arrange this at around the same time BABYMETAL were playing their two sold out shows at the legendary Tokyo Dome. Seeing BABYMETAL in their own country was a unique experience. We (Herman, Sam and I) had the chance to see them in Japan back in March, for a special fan club only show – which was still around 3000 people! And that gig was seriously impressive. Not just for the production, but because of the crowd and the way they react to BABYMETAL.

Now try to imagine 55,000 over-excited people in the massive Tokyo Dome! It was such an amazing show on so many levels, but the production was incredible. There were three huge tombstone-shaped catwalks connected to the centre of the stage, from which a tower rose with big screens all around it, and a platform as its top. I’m trying my best to describe it, but you had to be there.

The lights go down, the crowd scream their lungs out, huge screens turn on, and a skeleton tells us that ‘a song played one night won’t be played the next one,’ and then BOOM! 90 minutes of crazy lasers, explosions, pyro, the circular centre stage rotating from time to time… it’s nuts. The crowd is on fire, singing every chorus and shouting along. I had goosebumps and huge smile on my face throughout the entirety of both shows. There were no highlights, just two nights of pure amazingness from start to finish.

Of course, huge kudos to the Kami band who did a flawless job as usual, and to the technicians for the lights and sound. I kept saying ‘only in Japan’ but yeah, again the word flawless comes to mind.

And last but not least, the Queens of the two evenings: SU-METAL, YUIMETAL and MOAMETAL, completely overwhelmed by the love of 110, 000 fans (a lot of people travelled from all around the world to witness this). You could tell that they were having a great time and they delivered a perfect, energetic, fun and sometimes emotional show.

To sum it up: THEY RULED!

I was able to meet the band after the show (we’re friends, after all), and the girls were really exhausted but very very happy. They left for home soon after for a well deserved rest, while I carried on partying both nights in the bars of Shinjuku until dawn, but that’s another story…

The 10 Best Babymetal Songs Of All Time