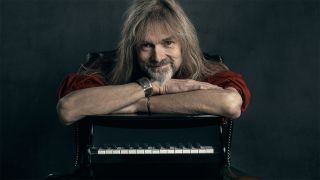 Ayreon have also released a promo for Hopelessly Slipping Away which sees Karevik joined by Oceans Of Slumber’s Cammie Gilbert.

“This album is incredibly diverse so I really couldn’t choose just one track because I wouldn’t want people to get the wrong impression of the overall mood of the album. So we decided to make a video for both an atmospheric track Hopelessly Slipping Away and a rocky track Get out! Now!."

Lucassen continues: “Get Out! Now! is a straightforward and energetic rock track with powerful drums, bass, guitars and Hammond organ. It features the illustrious Dee Snider and Tommy Karevik on vocals, and none other than the legendary Joe Satriani plays a blistering guitar solo.

“In this story Daniel’s intolerant father (Dee) banishes Daniel (Tommy) from his estate for having a forbidden affair with their servant Abby.”

Lucassen adds: “Hopelessly Slipping Away is a haunting track with analog synthesisers and violin, and it slowly builds to an epic climax with marching snares. In this video we see the ghost of Daniel (Tommy) hopelessly trying to reach out to his beloved wife Abby (Cammie) who clearly feels his presence but can’t see or hear him.”

Transitus will be released on September 25 through Music Theories Recordings on 2CD, 2LP gatefold red transparent vinyl, and a 48-page Earbook which includes 5 discs – the album on 2CD, a CD of instrumental versions, a CD of guide vocal versions, and a DVD with will include a behind the scenes video, a 5.1 audio and hi-def stereo mix of the album.

The release will be accompanied by a 28-page graphic novel by artist Felix Vega, which will also be included in the 2LP version.

CD2
1. Condemned Without A Trial
2. Daniel’s Funeral
3. Hopelessly Slipping Away
4. This Human Equation.
5. Henry’s Plot
6. Message From Beyond
7. Daniel’s Vision
8. She Is Innocent
9. Lavinia’s Confession
10. Inferno
11. Your Story Is Over!
12. Abby In Transitus
13. The Great Beyond