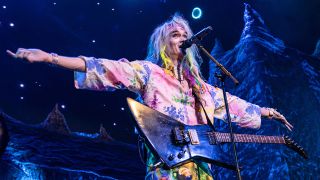 Arjen Lucassen has announced a brand new Ayreon studio album Transitus, and Dr. Who star Tom Baker will play the part of The Storyteller. Baker stars in a new video trailer which you can watch below.

"My new Ayreon album Transitus is without a doubt the most cinematic and outrageous album I’ve ever done," announces Lucassen. "I worked on it for three years, and it comes with a 25-page comic book. And even though there are a lot of “firsts” on this album, I guess my ‘Ayreon-sound’ is still quite recognisable. And hey, it’s narrated by one and only Doctor Who: Tom Baker!"

"My name's Tom Baker and I narrate this, you know," says Baker in the video clip. "And I've done it with such pleasure because I like the idea of the impossible. And as I get near death up comes this lovely story, this lovely music and I think to myself 'It's all been worthwhile'. You're going to love this."

Aside from the title, few details have been released beyond the album's title, which will be released through the Mascot Label Group later this year, but watching the video trailer, which features a haunted-looking house set in a graveyard, and coupling that with Baker's comments, it seems that Lucassen is looking into the supernatural for his next outing.