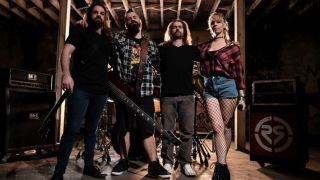 Sydney quartet Red Sea have premiered their new video for The Art Of Transcending with Prog.

The new single, which follows the quartet's Hurricane release, was inspired by singer Erica Bowron's experience of trekking to the Everest base camp in 2017 (she has also directed the new video). The video was filmed it in an abandoned building in the Southern Highlands of NSW at 3am in the dead of Winter with a skeleton crew.

"The building was completely abandoned - no electricity, no water, no toilets and it was literally falling apart around us," Bowron tells Prog. "We had to bring in, and hoist up ladders, every single piece of equipment, gear, water, food and toilet paper that we needed. It was Andy’s idea to do a night shoot to properly create the dark, moody atmosphere we wanted but that of course increased the difficulty and the danger exponentially. Thanks to a brilliant team, everything went great but it was a very long and very cold night - the breathing fog you see in the video is the real deal, it was 4 degrees celsius!”

Red Sea will release their debut album in early 2019. They will play: