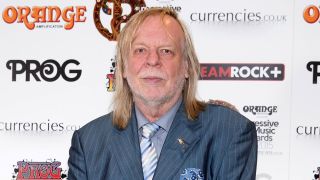 Rick Wakeman insists he, Jon Anderson and Trevor Rabin won’t be rushed into recording an album now they’ve reunited for live dates – but he hasn’t ruled out presenting new material when they play.

The former Yes colleagues announced their Anderson, Rabin & Wakeman project last month, after years of discussions – and the keyboardist confirms that the 2015 death of Chris Squire urged them into action.

Wakeman tells UCR: “It hit home to us all, certainly to me, that, ‘Hold on a minute, we’re not immortal.’

“Anything can happen almost overnight. If there’s something you want to do and you feel you have to do, you have to do it. You can’t say, ‘When we’ve got a bit of time, we’ll do that.’ We spoke to each other and went, ‘We’ve got to do this.‘”

He adds that fan response to the leaked information was another boost. “Our websites, Facebooks and Twitters went absolutely crazy with warmth, love and support from Yes fans everywhere,” he recalls.

“We realised that what we wanted to do was perhaps something that an awful lot of people wanted us to do as well. That played a massive part in getting the tour together.”

While writing material remains a target, Wakeman is cautious about moving too quickly. “Trevor quite rightly said, ‘We’re not going to rush into all this – it’s going to take enough hard work to put a great show together.’

“We can send music backwards and forwards, and start working on bits and pieces. Maybe if we’ve got a couple of tracks ready to perform, that would be great.

“If not, it’s not the end of the world. We’ve got all these months of working together and living in each others’ pockets. If we’re going to produce a full album, it’s got to be an absolutely cracking album.”

Meanwhile, the trio aim to rework classic Yes material for the tour. Wakeman predicts they might perform Roundabout, Owner Of A Lonely Heart and tracks from Fragile and Going For The One, although the decisions are yet to be made.

He says: “We want to try and take it to another level – but we’re not taking away the elements and sounds that made the songs.

“We’ve got two months where we’ll be sorting that out. It’ll start to take its own shape. The difficulty is that we’ve got such a massive choice.”

Anderson, Rabin & Wakeman commence their North American tour in October, while Wakeman will perform The Myths And Legends Of King Arthur And The Knights Of The Round Table at the TeamRock-sponsored Stone Free Festival on June 18 and 19. It’ll be the first time he’s performed the album since 1975.