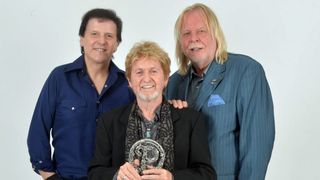 The former Yes man, who was named the 2016 Prog God at the Prog Magazine Awards in London last week, says working with his former bandmates again is “great fun” and feels “natural” – and adds they’re focusing on rehearsing for their upcoming tour.

He tells TeamRock: “It’s gonna be great fun for us, and the fans. We just want to have a good time, re-creating the wonderful music of Yes over the years.

“There’s a lot of jokes about life, talking about our love for music, and what we will be up to in the next couple of years. We have some songs based on music from all of us really – very intense to very ethereal. It’s really typical Yes energy.

“We’ll probably release EPs, but we will wait until the new year to record them. For now, it’s putting on a show that works.”

Anderson recalls his favourite part of the Prog Awards – when his bandmates Trevor Rabin and Rick Wakeman surprised him by joining him on stage at the end of the night.

He adds: “It freaked me out – but it made the night very special. ARW on stage at last!

“Progressive music is alive and well. There are so many wonderful musicians breaking down the musical wall, creating very inventive songs and music. I felt really at home. I had a blast. “

Anderson also reveals his constant creativity and love of life is the key to his lasting success.

“Just be open – you never know what is around the corner. I’m just chasing ideas that come my way – a dozen or more – it’s endless. I just need a few doors open.”

ARW will tour the UK in March next year.