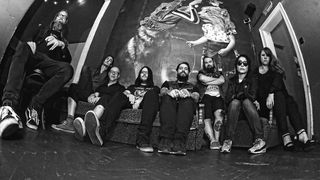 Crippled Black Phoenix have made their new track No Fun available to stream exclusively with Prog.

The song features on the band’s upcoming album Bronze, which will launch on November 4.

Speaking about the track, the band’s mainman Justin Greaves tells Prog: “As usual, I like to kick off the run to an album release with a favourite song, which does not already give everything away.

“No Fun is such a track. It is born from a riff that I have had on demo since 2004 – the year I started making Crippled Black Phoenix tunes. It kept almost being finished, but never actually saw life until this album.

“I am really happy with the new album as I should be. Personally I think it sounds the best yet, so I am proud to team up with Prog and let a first song out into the world in advance of the full album release.”

He continues: “No Fun might raise an eyebrow or two among our amazing fans, but this is typical of Crippled Black Phoenix – laying musical traps to lead and mislead people into the Phoenix Asteroids, to circle the universe forever.

“Let’s rejoice and have lots of No Fun!”

Crippled Black Phoenix will head out on the road across Europe in December in support of Bronze, kicking off in Manchester, UK, on the 12th of the month. Publicist UK and The Devil’s Trade will join them on the 14-date tour.