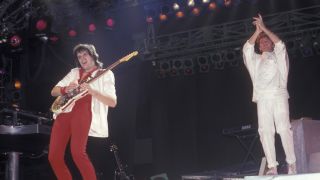 Writing on his own Facebook page, Rabin has confirmed: “About the most I can say for now is that we have decided to tour”, whilst Jon Anderson has added on his own Facebook page, “at last I will start singing with Trevor and Rick later in the year as ARW, we have been writing some unique songs together, and feel it is time to go out together and perform on stage… all very exciting…”.

Meanwhile, Jamie Glaser, who is the guitarist with the Anderson Ponty band has been a little more open on his own Facebook page: “The rumor you may have heard about ARW… Jon Anderson, Trevor Rabin, and Rick Wakeman.. is entirely true. They are doing a new band, have some unique music they have and are writing, and they will be doing a reinvention of YES as well. ( meaning some YES songs their way) They will most likely tour in 2017 and are hoping to do so. They have worked to get to this point for many years and are happy this will eventually happen. There is NO conflict between tours or dates with the 2 bands. and no one is replacing anyone in Anderson Ponty. I do not know anything more than what I just wrote. Ive asked Jon to make a greeting video , and he wrote me that he would do just that soon for us all. Here is a pic from the APB tour with the amazing Keith Jones and me during rehearsals. Thank you all……Jamie”