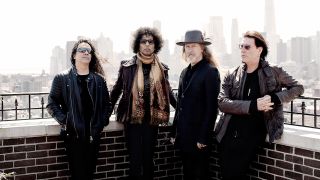 Alice In Chains have released a lyric video for Rainier Fog – the title track from their latest album.

The new promo presents the track at a slightly slower pace that the album version, with the clip released just days after the band announced an epic North American co-headline tour with Korn.

Those dates will get under way in July – shortly after Alice In Chains wrap up their run of UK and European dates which start at Glasgow’s Braehead Arena on May 23.

Speaking previously about the band’s follow-up to 2013's The Devil Put Dinosaurs Here, guitarist Jerry Cantrell said: “It’s a record we haven’t done yet, but it’s also a record that has all the elements of anything you would expect from us. It’s got our fingerprint.

In December, it was revealed that a new sci-fi film based on Rainier Fog was being planned. The project will be released across 10 videos, with each episode set to a different track on the record.