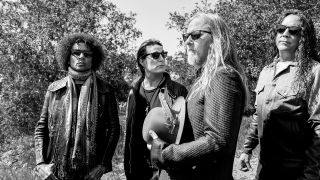 Alice In Chains have announced a new film project based on their latest album Rainier Fog.

The 90-minute sci-fi movie is titled Black Antenna and was produced and directed by filmmaker Adam Mason. The project will be released in 10 videos, with each episode set to a different track on the record.

Mason says: “I’m a long-time fan of the band and this was an opportunity to do something fresh and inspiring from an indie filmmaking side. The sound and vision between album and film are closely intertwined – it was a brilliant synergy that led to a really unique project.”

Alice In Chains drummer drummer Sean Kinney adds: “We’ve always toyed with the idea of creating videos for every song on one of our albums. Not only did we do that for Rainier Fog, it got totally out of hand and we made a whole goddamn movie.

“Everything that will be seen in the videos will be footage from Black Antenna to preface the complete film’s release.”

The first episode is set to roll out early next year, while the first trailer can be watched below.

Alice In Chains were last week nominated for a Grammy in the Best Rock Album category for Rainier Fog and will embark on a UK and European tour throughout May and June next year.