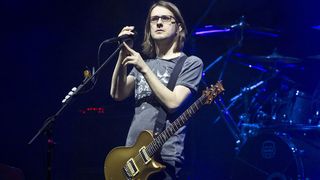 Porcupine Tree albums In Absentia (2002) and Deadwing (2005) are to be reissued on black and coloured vinyl next year via Kscope.

The new remastered editions will be pressed on heavyweight 180g vinyl and presented in gatefold packaging. Deadwing will be the first to arrive on February 23, while In Absentia will be released on March 9.

Along with black vinyl versions, special limited edition coloured vinyl editions will also be available and can be pre-ordered via Burning Shed.

Vocalist and guitarist Steven Wilson says: “Two of the most popular Porcupine Tree releases, In Absentia and Deadwing, have been acquired by Kscope and will be given long awaited reissues on vinyl in February and March, with new CD editions to follow later in 2018.

“For the first time since their original release, both albums have also been remastered with considerably less compression/limiting, and consequently the albums are now a more dynamic listening experience.”

Wilson continues: “In Absentia was the band’s seventh studio album and the first in a run of three albums that for many represent the pinnacle of the band’s artistic achievements – myself included.

“Following on from 2000’s Lightbulb Sun it had a distinctly heavier tone, partly due to a shift in musical interests, but also the addition to the lineup of the exceptional Gavin Harrison on drums.

“It was our first for major label Lava/Atlantic Records and features several of Porcupine Tree’s most loved songs, including Trains, The Sound Of Muzak and Blackest Eyes.

“The follow-up album Deadwing from 2005 was based on a film screenplay written in collaboration with my friend, director Mike Bennion. About half of the songs were started with a view to being part of the score to that film, but when it failed to move into the production stage, they instead became the foundation for the next PT album – with additional material written in collaboration with the band.

“The album features some of my favourite Porcupine Tree songs, including Lazarus, Mellotron Scratch and Arriving Somewhere But Not Here.”

Wilson has just released the soundtrack to the PlayStation 4 and PC game Last Day Of June and recently announced a North American tour for 2018. Find details below.

Steven Wilson and Richard Barbieri on the magic of Porcupine Tree