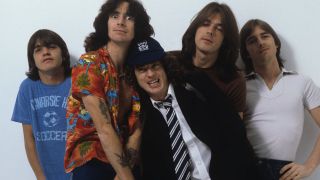 Earlier this week, AC/DC broke their social media silence to mark the 40th anniversary of their Highway To Hell album.

The band shared a short video graphic asking fans to help them celebrate the milestone over the course of the next month.

Now the band have uploaded a rare live video from July 13, 1979, showing them performing the title track on Dutch television show Countdown.

The clip previously appeared on AC/DC’s Plug Me In DVD box set, which was released in 2007.

The future of AC/DC has been the focus of much speculation over the last 12 months and there were rumours they were about to announce a world tour this week, although the date mentioned online has now passed.

However, it does appear that things have been going on behind the scenes.

In August 2018, Brian Johnson and estranged AC/DC drummer Phil Rudd were spotted outside Vancouver’s Warehouse Studios where the band have recorded several albums in the past.

And, in January, Johnson appeared to confirm he was back in the band after his well-documented hearing problems, when he's reported to have told Los Angeles outfit Terrorizer that he had been “sick of denying it.”