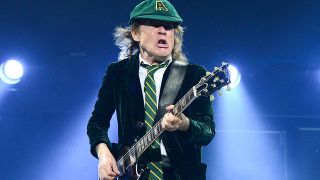 AC/DC’s longtime engineer and mixer Mike Fraser has confirmed that the band have been back in the studio “doing something."

In August last year, estranged AC/DC members Brian Johnson and Phil Rudd were photographed together outside Vancouver’s Warehouse Studios and were later spotted again with Fraser, as reported on the Ear Of Newt website, sparking rumours that the band were back recording together again.

Those rumours intensified back in January when US band Terrorizer bumped into Johnson at an airport, where he told them he was back in AC/DC and that he was “sick of denying it.”

And in an interview with Mastering Music Mastering Life, Fraser has now confirmed that they have indeed been back in the studio – but he’s not giving much away.

Asked by host Tony ‘Jack The Bear’ Mantz if the rumours were true that there was another album in the works, Fraser replies: “Well yeah, I could say that we've been in the studio doing something. What's come of that I can't discuss yet.”

Pressed on whether Brian Johnson is back on vocals, Fraser says laughing: “I think so.”

Johnson was forced to stop touring with AC/DC in 2016 under the threat of permanent deafness, with the band famously bringing in Guns N’ Roses frontman Axl Rose to complete their Rock Or Bust world tour.

Johnson has worked with audio experts Asius on a solution to his hearing problems and has played live with Muse, Paul Rodgers and Mick Fleetwood since then.

In February, US radio host Eddie Trunk reported that work on the AC/DC album had been completed and featured some guitar parts by the late Malcolm Young.