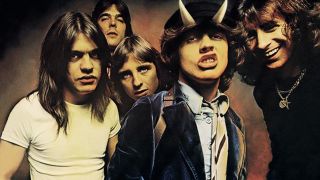 AC/DC have broken their social media silence to mark the 40th anniversary of their Highway To Hell album.

But they’ve now uploaded a short video graphic showing the AC/DC logo and Highway To Hell: 1979-2019 with the caption: “Celebrate with us all month long! #H2H40.” The famous riff from the track also plays over the top of the visuals.

They've also updated their Facebook cover photo showing the shot of the band that was used on the cover of the record.

The future of AC/DC has been the focus of much speculation over the last 12 months or so.

In August 2018, the rumour mill went into overdrive when Brian Johnson and estranged AC/DC drummer Phil Rudd were spotted outside Vancouver’s Warehouse Studios where the band have recorded several albums in the past.

In January this year, Johnson appeared to confirm he was back in the band after his well-documented hearing problems, when he's reported to have told Los Angeles outfit Terrorizer that he had been “sick of denying it.”