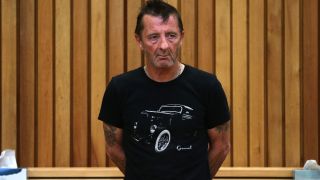 AC/DC drummer Phil Rudd faced a new arrest warrant after arriving at court late to answer a charge of threatening to kill today.

He’d been accused of attempting to procure a murder earlier this month, although that charge was dropped by New Zealand authorities the following day. He could spend up to seven years in jail if found guilty of the charges that remain, including possession of methamphetamine and cannabis.

Rudd, 60, had been ordered to appear at Tauranga High Court at 9am, but failed to arrive in time. Justice Timothy Brewer was in the process of issuing an arrest warrant when the drummer entered the room. The warrant was then dropped.

He entered no plea via attorney Paul Mabey and Justice Brewer ordered the case to be sent down to a lower court, since the most serious charge had been dropped.

On leaving the court, Rudd gestured towards media, jumped on the back of his security guard, then got into his car, which he reversed into the path of an oncoming truck. No collision took place.

His future with AC/DC remains uncertain, with the band set to tour next year regardless of whether he’s convicted. Frontman Brian Johnson said last week: “I don’t think we have to do anything – fire him or anything. I think the situation is going to take care of itself.”

Their 17th album, Rock Or Bust, is released on Monday. A full stream is available in some parts of the world.