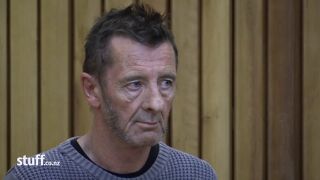 AC/DC drummer Phil Rudd has appeared in a New Zealand court charged with attempting to procure the murder of two men.

The 60-year-old was arrested early this morning when his home in Tauranga was raided by police, acting on information received from a member of the public. The alleged offences are said to have taken place between September 25 and 26 this year.

He later entered no plea at Tauranga District Court to the main charge, plus additional charges of possession of methamphetamine, possession of cannabis and threatening to kill. If found guilty, he could face a jail sentence of up to 10 years.

Investigating officers have named the two intended victims and the person who was to carry out the killings, but the information was suppressed by Judge Louis Bidois.

Rudd was released on bail and will return to court in three weeks, Stuff.co.nz reported. He made no statement as he left the building.

The drummer became the subject of speculation when he failed to appear for a video shoot in London last month, ahead of the release of AC/DC’s 16th album Rock Or Bust on December 1. The band later released a press photo that didn’t feature Rudd, but offered no explanation. Frontman Brian Johnson is said to have told fans during the shoot that Rudd was absent for family reasons.

Rock Or Bust will be the Aussie giants’ first album without mainman Malcolm Young, who’s been forced to retire as a result of dementia.