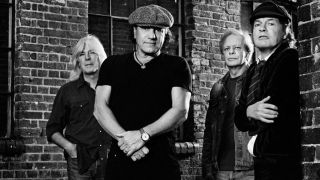 AC/DC have streamed 17th album Rock Or Bust in full via iTunes.

All 11 tracks of the highly-anticipated follow-up to 2008’s Black Ice can be heard as an iTunes Radio First Play here.

The Aussie giants’ first album without mainman Malcolm Young is released on Monday, following the launch of videos for Play Ball and the title track, below.

Malcolm, 60, was forced to retire earlier this year as a result of dementia. His career ended before work on the album began, but he’s credited as co-writer – even though brother Angus recently revealed he hasn’t heard the finished work.

AC/DC plan to tour next year, although the status of drummer Phil Rudd remains in doubt after he was arrested and charged with threatening to kill in New Zealand. He returns to court on November 27.

Rock Or Bust received its official launch in the small Australian town of Rock at the weekend.