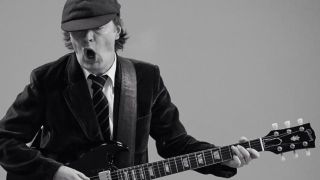 AC/DC guitarist Angus Young says Phil Rudd is not the same guy he used to be.

Rudd was sensationally arrested and charged with trying to procure the murder of two men earlier this month, leaving the band and fans in shock. The charge was later dropped, although he could still face a seven-year jail sentence for threatening to kill and possession of methamphetamine and cannabis.

And according to Young, Rudd’s behaviour was erratic during the recording of the band’s upcoming new album Rock Or Bust. The drummer later failed to show up for a video and photo shoot in London, leading to speculation about his future.

He tells USA Today: “It put us in a difficult situation. It put us in a spot where we couldn’t move forward. Does the guy show up? Is he reliable to do his job in good shape? We’ve always been a solid, reliable unit.

“Phil created his own situation. It’s a hard thing to say about the guy. He’s a great drummer, and he’s done a lot of stuff for us. But he seems to have let himself go. He’s not the Phil we’ve known from the past.”

Young added that drugs could be at the root of the problem, saying: “When you get into that land, it’s very hard. I don’t know the exact situation. I can only say, from our perspective, that the guy needs to sort himself out.”

In the wake of Rudd’s arrest, AC/DC vowed to go on with the album release and next year’s world tour.

Rudd remains under house arrest in Tauranga, New Zealand, until his next court appearance on November 27.