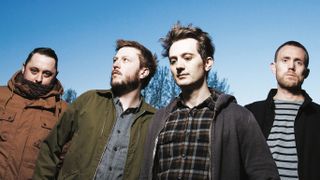 65daysofstatic have announced a European tour in support of their album No Man’s Sky: Music For An Infinite Universe.

The soundtrack album, which accompanies the upcoming PlayStation 4 and PC video game No Man’s Sky, was originally scheduled to launch on June 24 – but with the game’s release date pushed back by a couple of months, it’ll now be out on August 5.

The English outfit have scheduled 27 dates across Europe for later this year – and say that since the UK last week voted to leave the European Union, they’re more determined than ever to play shows across the continent.

The band say in a statement: “No Man’s Sky is a project about a borderless universe of infinite possibility. It’s certainly a brighter future to imagine than the one our little country just thrust upon Europe.

“We are always excited to be able to come and play shows in mainland Europe – now more than ever. Let’s get some anti-facist international solidarity going on and not let the demagoguery drag us down to the oblivion it has planned for us.

“See you on the road. Unless our passports are no good any more.”

In addition, 65daysofstatic have issued the cover art for the album and issued a stream of the track Red Parallax.

65daysofstatic No Man’s Sky: Music for an Infinite Universe tracklist

How 65daysofstatic Ended Up Creating No Man's Sky's Soundtrack