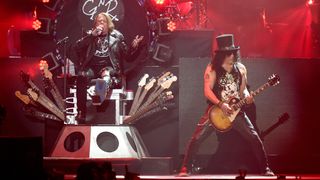 The day after this year’s Glasto at Worthy Farm was closed by a headline performance by Coldplay, bookies William Hill made the reunited GNR 8⁄11 favourites to headline the 2017 event.

Kasabian are priced at 5⁄4 to headline any of the three nights in 2017, with Radiohead and The Stone Roses joint third favourites at 2⁄1. The Foo Fighters are priced at 3⁄1.

William Hill spokesman Joe Crilly says: “After yet another successful Glastonbury, all thoughts will already be turning towards 2017’s festival and it looks likely that a couple of recently reformed bands – Guns N’ Roses and The Stone Roses – may be headlining the Pyramid Stage next summer.”

The Who, Manic Street Preachers, Red Hot Chili Peppers, Bruce Springsteen, The Prodigy and Justin Bieber are among the other acts in the running for headline slots at Glastonbury next year.

Download festival boss Andy Copping has already declared his desire to have Guns N’ Roses play at Donington in 2017. He told TeamRock: “I’d love to have the reformed Guns N’ Roses here, who knows? I’m certainly not giving any clues and I’ve not booked them, but that would be an amazing thing.

Axl Rose, Slash and Duff McKagan announced their reunion earlier this year and played at Coachella and in Las Vegas ahead of their Not In This Lifetime tour, which kicked off last week.

Frontman Rose has also been working with AC/DC, filling in for Brian Johnson who was ordered to stop touring or risk going deaf.