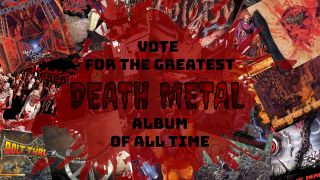 Of all metal subgenres, death metal is undoubtably the most brutal. Slotting into the "extreme" category – along side black metal, doom metal, sludge metal, slam, grindcore and speed metal – death metal, like the aforementioned others and as the name suggests, pushes heavy metal music musically and lyrically as far as it can go (and often further than many mainstream metal fans can cope with).

Emerging in the mid 80s death metal developed, like the majority of extreme metal subgenres, from the foundations laid down by seminal NWOBHM band, Venom and thrash heavyweights, Slayer.

Inspired by the satanic imagery, violent lyrics and ferocious velocity of these earlier bands, acts like Death ('the first word in death metal'), Obituary, Morbid Angel and Possessed pushed thrash to its limit in the US, inventing death metal in the process, while the likes of Celtic Frost, Mercyful Fate, Hellhammer, Bathory and Napalm Death were also breaking boundaries and scaring grandmas in Europe – what a time to be alive!

By the late 80s, the subgenres of death metal, black metal and grindcore were born, and by the early 90s melodeath had taken Sweden by storm. The brutality had been unleashed upon the masses and there was no turning back.

As such a vast and expansive genre of metal, that has spawned, and continues to spawn, a number of repugnant children, it's almost impossible to narrow down the greatest death metal albums of all time.

So we want to know would make your list! Death's Scream Bloody Gore? Cannibal Corpse's Butchered At Birth? Carcass' Heartwork? Bolt Thrower's ...For Victory? At The Gates' Slaughter of the Soul?

It was a mammoth task to compile 160 different albums into our poll list, so obviously there are many albums missing. If you want to add 5 of your own entries, just separate each nomination with a comma.

We'll count the first 5 you list (no need to specify the band, just the album title will do!)

We'll be releasing the results soon, so be sure to check back regularly to see if your top records made the cut, but first  – fill out the form below!