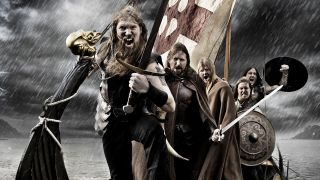 From the birth of genre in the UK and Sweden to its explosive proliferation in the US during the early 21st century, melodic death metal has proved itself to be one of the most enduring and influential sounds in heavy music’s illustrious history. Plus, it fucking slays. Here are ten of the most unmissable melodeath milestones. As Tomas Lindberg would say… GO!

Arguably the point where melodic death metal became a cohesive idea, Heartwork still sounds fantastic 22 years later. Every song has at least one unforgettable hook, genius riffs come thick and fast and Colin Richardson’s production was an authentic game-changer. Melodeath may have been defined by the Swedes, but it was Carcass that made its definitive statement.

As with Heartwork, the influence of Slaughter OF The Soul can be heard in a vast amount of metal from the last 20 years, not least the entire post-Killswitch metalcore movement in the US. A flawless masterpiece that hammered home how distinctive At The Gates’ sound was, and how brutally effective it could be. Massive tunes, terrifying levels of aggression and precision… it’s an all-time heavy metal classic.

A major figure in the evolution of melodic death metal, Dan Swanö has produced countless records and, with Edge Of Sanity, made several classics of his own along the way. Crimson remains the band’s finest record: a one-track, 40-minute journey through grandiose melodeath dreamscapes and moments of wildly imaginative prog metal abandon, it brought depth and daring to the nascent genre and seldom receives the recognition it deserves. Bonus points for a very young Mikael Akerfeldt’s guest appearance.

Melodic death metal’s most successful exponents are cited as a major influence on countless modern bands, not least Killswitch Engage and Trivium. In fact, we could have picked any of the Gothenburg crew’s first five records for this list, but Clayman just edges its competitors for representing the moment that In Flames started sounding like genuine world beaters with a refined commercial sensibility that would, in turn, inspire an entire generation. Plus, of course, Pinball Map is an absolute melodeath rager.

Soilwork have made more sophisticated records than The Chainheart Machine. They have arguably made several better records than The Chainheart Machine, but it is still the Helsingborg band’s second album that seems to best represent the way they dragged melodic death metal into the future. A gleaming, streamlined and deceptively vicious take on the genre, songs like Bulletbeast and Neon Rebels are hard to beat for unadulterated melodeath thrills.

Often overlooked, The Crown have been one of Swedish metal’s most consistent bands over the years. Their masterpiece remains the album they made with At The Gates’ frontman Tomas Lindberg as lead vocals: his scabrous roar made the band sound even more ferocious than usual, and the scything crunch of the riffs in unrelenting tirades like Under The Whip and Out For Blood provided the perfect riposte to those who feared that melodeath was losing its balls. Best of all, The Speed Of Darkness cheekily references the theme from Knight Rider. Job very much done.

One of the Gothenburg melodeath scene’s Big Three (we’ve actually just made that up, but it makes sense, damn you!) alongside In Flames and At The Gates, Dark Tranquillity have not enjoyed quite the same level of success and acclaim as their peers, but their strongest records rival anything else the genre has conjured. 1997’s The Mind’s I deserves a nod for its snotty intensity, but it’s the band’s seventh album that saw them hit their greatest heights. A vivid, widescreen melodeath extravaganza.

Of all the American bands that worship at the altar of At The Gates, The Black Dahlia Murder have long been both the most distinctive and the most legitimately deathly. 35 minutes of flat-out fury and spite, Nocturnal suggested that Trevor Strnad and his comrades were determined to drag melodic death metal away from the mainstream and back into the fires of Hell. With shades of Cradle and Dimmu thrown in for good measure, it’s a sublime display of malicious but melodic intent.

Still rising in popularity more than two decades into their career, Amon Amarth represent melodic death metal’s epic and bombastic wing and Twilight Of The Thunder God is the album that turned them into a global concern. Never mind all the Viking-related stuff, this band’s sound has always been rooted in (a) crushing death metal and (b) the irresistible catchiness of Maiden and Priest. This, incidentally, is the kind of recipe we can definitely get behind. Raise your horns!