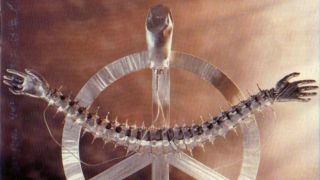 Yet, even then – three years after Napalm Death guitarist Bill Steer had teamed up with drummer Ken Owen – there was something original, unique about their approach. With former Electro Hippies bassist Jeff Walker completing the line-up (he joined in 1987), the trio were transforming the grindcore base developed by Napalm Death, adding death metal touches and an amazing appreciation for melody.

By 1989, not only did they have the patronage of John Peel – they did their first Radio One session for him that year – but they had also stepped up a gear with second album Symphonies Of Sickness, which had an altogether more cohesive and developed style, thanks in part to producer Colin Richardson.

Two years later, with Swedish guitarist Mike Amott now added to the soup, Necroticism – Descanting The Insalubrious (once again produced by Colin Richardson) took Carcass further away from their ultra-extreme roots, being comparatively more palatable to those whose metal tastes were a little more refined. In a way, this was the precursor for a true leap of faith. Enter Heartwork.

“I don’t think there’s any doubt that this album has been a major influence on all grind and death metal bands – you’ve only gotta hear so much that’s released these days to realise this,” says Jeff. “But it must be a little odd for people like Bill and Mike when guitarists like Gary Holt of Exodus rave about that record – he was a major inspiration for them.”

Work on Heartwork actually started even as the band were touring on the back of Necroticism…. They’d wasted no time in getting stuck into the new project, with the belief that what they were doing was moving everything to another level, rather than taking a radical shift in emphasis.

“I suppose what we were really doing was going for shorter songs. By the time Symphonies Of Sickness came out, we were getting almost progressive, in the way that the tracks were so long. When Mike arrived for Necroticism…, we were beginning to write songs that were less wandering, and they were certainly going down rather well with the fans. Not that we weren’t capable of being complex or technical – something like Arbeit Macht Fleisch on Heartwork proved that to be the case.”

The band had the whole album demoed by the time they toured in Europe with Death and Cannibal Corpse in the spring of 1993, and surprised everyone by playing all of the new songs on that tour, despite Jeff’s objections.

“All the others wanted to do it, but I never saw the point,” he explains. “The fans had never heard the tracks before, so why would we fill up our set with them? But I was outvoted and they did go down really well. It was also to be the only time that Mike ever got to play the songs live.

“The aforementioned demo was recorded in February 1993, and we did it at Parr Studios in Liverpool – in Studio Three, to be precise, which was the smallest room there. And I had a slight vocal problem at the time. You see, I’d been to see Brutal Truth and Cathedral play, and had a hash pipe afterwards – that caused the problem. Thanks to [Brutal Truth frontman] Kevin Sharpe!

“The demo versions of the songs were a lot rawer than the album ones – and I have to say that I prefer them. The production was more basic and seemed to suit what we were doing.”

Now, here’s where myth meets the hard fist of realism, and ends up with a bloodied nose. Legend has it that the reason Bill did no vocals on the album – as he had on the previous three records – was because producer Colin Richardson felt that Jeff’s style was much more in tune with the direction the band were taking. Not so, insists the frontman.

“Bill made the decision himself. He just wanted to concentrate on his guitar playing. We all tried hard to persuade him to sing on the record – and by ‘we’ I am including Colin. But he refused to budge. It all came to a head when, one day, we were going on at him so much that Bill walked out of the studio and came back an hour later. I think he’d made his point that this wasn’t something he was prepared to discuss, and the matter was never mentioned again.

“If I’m honest, I think the album suffered from not having his vocals on it – all you got were mine, and I don’t believe that was enough.”

But if that story is untrue, then there is credence in the rumour that Colin Richardson was nearly shoved out the door. Jeff recounts a moment when the band went down to the studio to inform him that he was out of the picture…

“Colin was at Parr producing a band called Disincarnate, who had one-time Death guitarist James Murphy in their line-up. And, to be straight about it, we were fed up with the way that Colin was diluting what we did by working with what I’d call second-rate bands. It really was getting to us. Somehow, we believed he was insulting Carcass by taking any old job going. We decided to go down to the studio, and tell him that he wasn’t gonna do Heartwork.”

The band’s idea was to work with house engineer Keith Andrews, effectively producing themselves under his guidance. However…

“Colin talked us round. Simple as that. He convinced us that he was still the best man for the job, and eventually we agreed to keep him on. It was lucky that nobody else had been asked to produce the record! For instance, on that Death/Cannibal Corpse tour, all the bands shared a bus, and the sound engineer was Scott Burns – also a top producer in his own right!”

Still with the reprieved Colin at the helm, Carcass went into Studio Two at Parr on May 18, 1993, working on the album until June 21. For the most part, it was a smooth operation. Although they did have huge trouble getting a good guitar sound…

“Tell me about it!” laughs Jeff. “We spent two, or maybe even three days trying everything. That’s at a cost of £100 per day, which to us was expensive. Nothing worked. Until we had the bright idea of going into Studio Three, where we’d done the demo, and got a good guitar sound right away!

“It always amuses me when I hear from bands how they spend ages and a lot of money trying to get a guitar sound like that on Heartwork. Now they know the truth… we did it in the smallest, cheapest room at Parr!”

If the record’s studio progress was comparatively uneventful, things didn’t go totally the band’s way on the album’s release in October 1993, with a cover featuring a photo of a sculpture by renowned Swiss surreal/fantasy artist HR Giger. In the UK, it charted at No.54 – not only the first time the band had made the ‘hallowed’ mainstream Top 100, but it was also to prove their highest ever chart position. But celebrations were cut just a little short by the need to find a new guitarist. Soon after recording had finished, Mike Amott quit – or was asked to leave.

“Mike had already told our manager, Martin Nesbitt, that his heart lay in this new project he had called Spiritual Beggars, and that he planned on leaving after the Heartwork tour. On top of that, he’d been stuck in Israel for ages because his passport and equipment had been locked away due to some unpaid bills. He only just got back to England in time to do his solos.

“Taking all of this into account, Bill and I felt it was better for Mike to leave before the tour, rather than dragging it all out. The guy we had lined up was Mike Hickey, who had been a roadie for us. He brought a real injection of energy and enthusiasm, which was something we’d been missing for a while, if the truth be told. It was a pleasure to play with someone who cared.”

However, the problems for Carcass didn’t end there. In America, their label, Earache, had done a licensing deal with the mighty Columbia corporation for the release of all the label’s records, but Jeff was not happy with the way things were handled out there.

“Columbia had no choice under the terms of the agreement but to release everything Earache gave them. However, it was obvious they didn’t give a shit. At times, we felt like we’d been thrown into a Spïnal Tap scenario, meeting all of these executives who didn’t know who we were – and didn’t care. We actually signed direct to Columbia for our next album [Swansong], but it was all a disaster.”

The band were involved in Earache’s plans to resurrect Heartwork in the 21st century – and to make it available this time as a DualDisc. This happened in 2008.

“We were determined that our fans should have the best possible deal,” insists Jeff. “So, not only did you get the original album, but there was also room for all the demo versions. There’s also a DVD documentary, for which the four of us are interviewed, and an entire gig from that Death/Cannibal Corpse tour. It was a strong package – and avoided the accusations that we’re ripping anyone off.”

So, with the advantage of hindsight, how does Jeff view the Heartwork album now? Was it innovative? Is it the band’s finest hour?

“To answer the latter first – no, it wasn’t. Not for me anyway. I much prefer the Reek Of Putrefaction and Symphonies Of Sickness era. But if you ask Mike, I guess he’d say this one stands out. But as I said earlier, its influence is clear, and without it the whole melodic death metal movement might never have happened. Typical though, isn’t it? When it came out, all we got was indifference, and a lot of accusations that Carcass had ‘sold out’. Now it’s worshipped. Rather like At The Gates’ Slaughter Of The Soul album, it’s a record that people have only grown to appreciate after a long time. That says a lot about trends.”