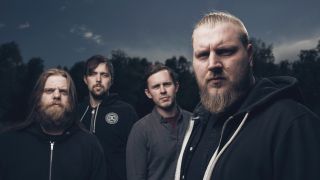 Where many of their post-deathcore peers have a great sound but no songs, Lord Of War have the razor-sharp tunes to match their blistering chops. Last year’s Suffer album was criminally overlooked and is simply the finest example of ultra-modern death metal to emerge in years. Future gods. Listen to: Manufactured Existence (Suffer, 2016)

Murky UK death with a heart of horror

Death metal seldom gets more twisted than Vacivus’s squall. Their new album could propel this Sunderland quintet to the upper reaches of the UK extreme underground. Their muscular but gnarly attack will leave you breathless. Or dead. Listen to: Towards Infinite Chasms (Temple Of The Abyss, 2017)

Underground heroes in their native Switzerland, Carnal Decay’s hybrid onslaught offers a sublime blend of DM, brutal hardcore and flat-out, swivel eyed grind. Their latest album brims with weirdly accessible moments while removing your face. Listen to: Your Guts My Glory (You Owe You Pay, 2017)

Featuring two members of avant-black metallers Dodecahedron, Ulsect’s self-titled debut takes their reality-warping dynamics into the realms of death and post-metal, adding heaving riffs and doomy passages into their repertoire of whorls. Listen to: Moirae (Ulsect, 2017)

So This Is Suffering

Obdurate bruisers on the deathcore trail

For anyone concerned about the future of deathcore, So This Is Suffering offer a defiant, jaw-shattering response. Insanely heavy but subtly sophisticated, the songs on new album Palace Of The Pessimist are full of sharp ideas and lacerating hooks. Suffering never felt so good. Listen to: Xenomorphic (Palace Of The Pessimist, 2017)

Standard bearers for a new breed of DM that ups the brutality ante on every level, Cytotoxin are rapidly establishing themselves as one of Europe’s most extreme bands. Light-speed blasting, wild technicality and a dash of futuristic fervour combine to make your skull explode. Nice. Listen to: Antigenesis (Gammageddon, 2017)

The curiously named Images At Twilight play extreme symphonic metal, with a fair few death and black metal influences. There are shades of Bal-Sagoth and Carach Angren, but despite the orchestral touches, the vibe is less melodramatic. Listen to: Ninhagaz (The End Of An Era Chapter I) (Kings, 2015)

Alabama brutes with a deathly core

Flying the flag for the thrilling midpoint between brutal DM and state-of-the-art deathcore, Widowmaker’s face-flaying ferocity and crushing breakdowns will send fans of Thy Art Is Murder into a state of frothing rapture. Check out their self-titled debut EP for some top-notch thuggery. Listen to: The Nihilist (Widowmaker, 2017)

Light Of The Morning Star

London band Light Of The Morning Star are an unusual entity, with a sound that could be described as gothic metal, albeit with the ‘metal’ component drawn from the world of contemporary black/extreme metal. Sinister vampiric goodness. Listen to: Coffinwood (Nocta, 2017)

A Sense Of Gravity

Wild, extreme prog from the home of grunge

Doggedly putting Seattle back on the heavy map, A Sense Of Gravity’s unhinged take on fervently proggy death is one of the most distinctive noises in metal right now. Scattershot structures and dizzying shred-worship collide: it’s the sound of heavy music being catapulted into the future. Listen to: Echo Chasers (Atrament, 2016)

Thriving in a self-constructed midpoint between pulverising extreme metal and forward-thinking prog splendour, Replacire are inspirational madmen. Second album Do Not Deviate is an audacious celebration of insane ideas and mind-bending virtuosity. It also has huge tunes. Listen to: Moonbred Chains (Do Not Deviate, 2017)

An older band who have only kicked into gear recently, Cumbria’s Repulsive Vision formed in 2010 but released their debut record this year. Turning the heads of DM fans, it’s fast-paced, aggressive, sometimes thrashy, and satisfying. Listen to: Fragmentary (Look Past The Gore And See The Art, 2017)

A collaboration between members of Horseback and Krieg, Poison Blood are purveyors of dirty BM with an anarcho-punk edge. Not every band convincingly nails the blackened spirit, but this dastardly duo are masters of mystic malevolence. Listen to: Myths From The Desert (Poison Blood, 2017)

The soundtrack for an angry and hateful world, VLVD’s face-ripping punk-metal attack is loud and nasty enough to make Trump shit his pants. The North Carolina crew’s debut EP is a relentless adrenaline blast. The revolution starts here. Listen to: Straight Teeth (V-EP, 2016)

Whoredom Rife appeared three years ago and have already made a name for themselves with their unapologetically intense take on black metal. A subtle but effective updating of the Norwegian classics. Listen to: Cursing The Storm To Come (Dommedagskvad, 2017)

When the title track of a band’s only album clocks in at 28 minutes, longer than many albums, you know they’re not messing around. That record, last year’s A Winter’s Tale, marks Norwegians Abyssic out as masters of symphonic extreme metal. Listen to: A Winter’s Tale (A Winter’s Tale, 2016)

Technically Locust Leaves aren’t a new band, but they’ve only recently come to life, releasing their debut album A Subtler Kind Of Light this year following a split record in 2012 and apparent inactivity after that. A progressive and creative take on the extreme metal template. Listen to: Pillar (Vraxos) (A Subtler Kind Of Light, 2017)

Scotland’s king of the arcane mosh

A one-man blackened speed metal machine from Aberdeen, Hellripper does things the old-school way, but this is no lazy retro affair. Instead, the songs on current album Coagulating Darkness stab and slash like newly minted classics beamed in from the mid-80s underground, but laden with contemporary oomph. Listen to: Bastard Of Hades (Coagulating Darkness, 2017)

A crushing maelstrom of aggression

Death metal diehards Abhorrent Decimation have an unerring knack for delivering rapacious grooves and subtly irresistible hooks. Their debut album, Miasmic Mutation, was a brutal triumph, but new album The Pardoner is really grabbing people’s attention. This is refined and smart 21st century extreme metal, full of grim lyrical insights and rebellious flair but never less than 100% brutal. If you saw them at Bloodstock in August, you’ll know they destroy live, too. If UK death metal is on the rise, Abhorrent Decimation are riding the crest of the wave. Listen to: Conspire (The Pardoner, 2017)

Formed in the Netherlands in 2014, Turia have released two albums of hypnotic, minimalist, fuzzy and otherworldly black metal. The songs are unrelenting and trance-like, with paintstripping screams, chugging guitars and loose, even calming, melodies. Immerse yourself… Listen to: Dede Kondre (Dede Kondre, 2017)

Savage DM with an important message

One of the best albums to emerge at the end of last year, Animus didn’t just feel like one of the biggest blows from a UK death metal scene that was starting to throw haymakers, but a sign of extreme metal’s well-worn hallmarks being recklessly fucked with. Proudly rallying against sexism in the scene while subverting classic death metal tropes, Venom Prison emerged as one of the most exciting bands our isle has produced in recent years, and even made their Hammer cover debut last month as a part of our special State Of The Nation address. Listen to: Abysmal Agony (Animus, 2017)

Misanthropic fury with a lust for noise

When hardcore gets nasty, the results are often thrilling, but few modern bands sound as hellbent on destruction as Boston/Connecticut crew Slow Death. Using extreme noise as an extra weapon, their bursts of breakneck belligerence will make you want to smash everything in sight. Listen to: Hungry Rats (Hate-Filled World, 2017)

Dirty destruction with a hardcore soul

Blackened sludge warriors on a mission to terrify, Wildspeaker deal in organised chaos and scabrous, post-Converge riffing. New album Spreading Adder is a compelling exercise in pitch-black rage, but it swings like a megalodon’s ballbag and kicks like a donkey on PCP. Listen to: Still Life (Spreading Adder, 2017)

Groove metal terrorism from the US east coast

One of roughly 217 current bands featuring Municipal Waste legend Dave Witte on drums, River Black’s rampaging groove metal assault stands out from the extremity crowd due to the sheer power of the band’s riffs. Check out their eponymous debut and bang your head until it snaps off. Listen to: Shipwreck (River Black, 2017)

Rise of the British neck-wreckers

Unsung heroes of the UK scene, Wales’s Chaos Trigger draw from death metal, hardcore, groove metal and grind, but the end result of that crosspollination is thrillingly individual. Degenerate Matter is one of 2017’s slow-burning gems: the riffs, the rage, the intensity… what’s not to like? Listen to: Binary (Degenerate Matter, 2017)

A one-man black metal outfit, Riivaus hails from Finland and favours a traditional corpsepaint, forests and snow aesthetic. That’s apt, because the riffing on this year’s debut album is cold as ice, while also being surprisingly punky and catchy, making for an irresistible onslaught. Listen to: Uhrirovio (Lyöden Taudein Ja Kirouksin, 2017)

The claustrophobic and crushing tunes of Tchornobog are not for the fainthearted, combining black, death and doom metal in lengthy and disturbing fashion. A single album, released this year, is the only evidence of this one-man US-based act – who knows what the future will hold? Listen to: I: The Vomiting Tchornobog (Slithering Gods of Cognitive Dissonance) (Tchornobog, 2017)

Cumbrian crushers go for the throat

Like being clubbed to death by robots, Triverse Massacre’s precise, future-death assault is terrifying but impossible to ignore. Latest EP Hades suggests that this Carlisle quintet have the chops, the songs and the intensity to make a devastating impact. Listen to: Styx (Hades, 2017)

Sweden is hardly a stranger to kickass death metal, and Stockholm collective In Reverence produced one of the finest extreme metal albums of 2017 so far with the regal The Selected Breed. Those impatient for a new Behemoth album could do worse than check out these crushers. Listen to: Prometheus (The Selected Breed, 2017)

Appearing in 2014 with debut album Tussen Hun En De Zon (Between Them And The Sun), Netherlands trio Tarnkappe offer embittered yet stirring black metal, played with total zeal. Last year’s Winterwaker is a step up, staying true to its claim of summoning “the Cold spirit from the North”. Listen to: Aan De Aarde Gebonden (Winterwaker, 2016)

With Spanish, Polish and Greek contributors, Necromaniac transport the listener back to a time before the thrash, death and black metal genres properly parted ways, recalling the darkness of early Slayer, Celtic Frost and more with a furiously organic assault. Listen to: Underneath The Crucifix (Morbid Metal demo, 2015)

Releasing their self-titled debut album this year, Orm are rising stars. Epic and majestic black metal is the order of the day, with harsh dual vocals and ethereal backing vocals cutting through the riffs to elevate their songs. Listen to: A Tree Ablaze/Yggdrasil Brænder (Orm, 2017)

Flat-out Swedish devilry with fire in its belly

The latest band to erupt from Sweden’s frequently seminal black metal scene, blackhearted bastards Kadaverdisciplin will thrill fans of Marduk, Watain and Dark Funeral with their remorseless and necrotized but very metal onslaught. Satan is real and cranked up to 11. Listen to: Death Supremacy (Death Supremacy, 2017)