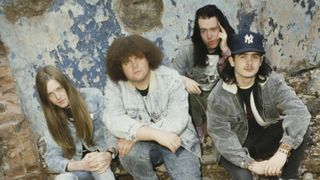 Fast, furious and ridiculously intense, grindcore has been deafening and thrilling fans of untamed brutality for three decades. It’s death metal’s snotty younger brother, hardcore punk’s evil twin and one of the most deceptively inventive subgenres the world of heavy music has yet spawned. If you fancy having your ears wrenched off, these ten albums are the ultimate starting point. Grind on, kids!

Napalm Death – From Enslavement To Obliteration (1988)

The gods of grind incinerated the rulebook with their 1987 debut Scum, but it was the follow-up that truly cemented the essence of balls-out grind. FETO kicks off with the Swans-aping dirge of Evolved As One and then erupts into a remorseless barrage of Frost-meets-Siege chaos that has yet to be topped for sheer snotty exuberance.

Morbid Angel men David Vincent and Pete Sandoval teamed up with vocalist Oscar Garcia and guitarist Jesse Pintado (later of Napalm Death) for this monstrous explosion of deathly grindcore fury. Songs like Dead Shall Rise and Fear Of Napalm are established classics: more fervently metallic than primitive punk, they pack a precise punch that influenced an entire generation. Pintado sadly passed away in 2006 but for this alone he deserves legendary status.

The band that injected fresh adrenalin into grindcore’s nebulous template as a new millennium loomed, Nasum’s nails-hard extremity upgrade ensured that their debut album was almost universally hailed as a classic. Countless bands have ripped the Swedes’ sound off over the years, but the original is still the blistering best.

Warped, artful grindcore executed by the fearsome two-man blasting machine of guitarist Scott Hull and drummer Brian Harvey (not the ex-East 17 man, incidentally) and defined by vocalist JR Hayes’ grotesque poetry and feral screams, Prowler is a twisted masterpiece and indisputable evidence that grindcore can be as mesmerizing and three-dimensional as any other subgenre.

New Jersey’s premier grind fiends pulled off the neat trick of making insane bursts of speed and violence sound palpably psychedelic on their classic third and final album. 23 minutes of mind-bending white-out hypergrind, The Inalienable Dreamless remains a terrifying work of skewed art that seems to exist in its own sonic dimension.

Alongside Napalm Death, Brutal Truth gave grindcore the exhilarating launch that its subversive ferocity demanded. You could pick any BT record for this list, but Sounds… just pips its siblings due to the sheer diversity and deranged experimentalism of its contents. From startling exercises in savage brevity to disorientating psych-rock squalls, it’s grind with no brakes, no safety net and absolutely no fear.

Not so much a grindcore album as a demented assault on the senses, Arsedestroyer’s only full-length album uses noise as a weapon of terror. Thirty-eight untitled tracks rattle by at a hair-raising pace, with scant regard for standard production values and nothing but venomous disdain driving the whole barking mad enterprise forward. There is nothing else quite like it.

The line between grindcore and its metal-shunning counterpart powerviolence has always been blurred, but few bands have claimed that intermediate territory with such aggression and power as Oxnard, California’s Nails. Currently one of the most revered bands in the extreme metal underground, the trio’s debut album is 14 minutes long and guaranteed to wrench the breath from your lungs. Total violence, delivered with utmost conviction.

What is it like to go orienteering with Napalm Death?

New Testament: The Kids Are Alright (Napalm Death on Babymetal)