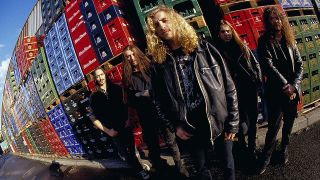 In selecting the ten shiniest jewels in doom’s heavy crown, one proviso is crucial: we’re not counting Black Sabbath. Because Sabbath transcend sub-genre, because doom is an underground scene that (eventually) emerged in their wake, and because if we did include the Sabs, there’d only be space for about four other bands. Here are the ten that owe much to Sabbs, but also rule.

When Bobby Leibling’s occult hellraisers released this full-length debut, 14 years into their slow-release career, their magisterial Virginian take on Sabbath’s downer fundamentals already sounded spookily out-of-time. Even more so when Peaceville reissued, renamed, repackaged and resequenced the album in 1993, ramping up the raw garage sound of Pentagram’s original tapes.

With that audacious, literally genre-defining title, Candlemass honed and nailed an entire sound, style and atmosphere. Each song is virtually a template for How To Do Epic Doom Metal, from disconsolate opening monolith Solitude to the ornamental closing synths and female vocals of A Sorcerer’s Pledge.

The shambling LA foursome had distinguished themselves as one-of-a-kind slow n’ low pioneers with vocalist Scott Reagers since 1981, but when the sainted Wino took over they focused all their wayward strengths onto their defining statement: a bleak, strung-out monument to alienation, war, madness and drug addiction.

With their second album, the Halifax quintet began their extraordinary journey from scruffy tape-trade scenesters to planet-straddling rock gods. The self-explanatory Gothic raised the bar, introducing arty ‘80s goth influences to an insular underground, honing their songwriting, broadening horizons and nailing a wholly distinctive sound that they soon left behind.

“Morosely magnificent slow-motion doom,” promised the tagline, confusing many who came to Cathedral from Lee Dorrian’s stint in Napalm Death, or Gaz Jennings’ history in flippant thrashers Acid Reign. The result of their mutual doom obsession, twisted by their own forward-thinking extreme impulses, FOE remains truly a unique, pivotal recording.

Solitude Aeturnus – Beyond The Crimson Horizon

Many prefer the perennially underrated Texans’ debut, but BTCH has a more stately grandeur and sonic elegance, the band zeroing in on myriad strengths: the celestial grace and power of singer Robert Lowe, the ethereal architecture of John Perez’s guitar, and the arcane lyrical narratives of bassist Lyle Steadham.

Ratcheting the still-embryonic strains of gothic doom/death with a monochrome rainbow of visionary, eccentric flamboyance, TLTS has become an unassailable benchmark, not just for the Bradford sextet, but for the whole scene. Yet for all the surreal romantic lyricism, plaintive violin and lovelorn crooning, it still manages to be distinguished by monstrous riffs.

Thergothon – Stream From The Heavens

In the early ‘90s, doom sank into a quagmire of suffocatingly inaccessible extremity, bands like Winter, Eyehategod, Disembowelment and Unholy twisting the genre into horrifying new shapes. None were more horrifying than the non-Euclidian geometry of Finnish pioneers Thergothon, whose sole LP is a glacial Lovecraftian nightmare, still radiating faraway mystique.

Some say 1997’s Come My Fanatics is the definitive Wizard, but Dopethrone is fuzzier, scuzzier, nastier and earthier. This doomed line-up’s abrasive three-way chemistry is at full pelt, and that moment when the juddering Vinum Sabbathi turns into the hypnotic Funeralopolis is one of the most bong-in-the-air, shit-eating-grin moments in doom.

Why SubRosa are taking doom metal into bold new waters

The Story Behind Electric Wizard: Dopethrone