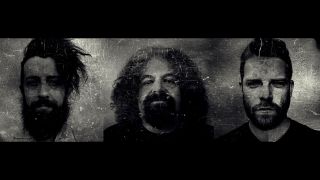 The tumultuous result of this unruly triumvirate is The Infinite Mirror of Millennial Narcissism, released on Shane’s new label, Extrinsic Recordings, on August 24. A short album with a long history, it sounds like a work crew of particularly industrious daemons pulverising your skull, just so they can pump in a few gallons of caustic bile underneath, all while surrounded by an atmospheric sulphur-whorl of riffs.

Not only do we have a stream of this delight in all its 15 and a half minutes of sense-lacerating glory, we have an interview below with Sir Shane below on the genesis of the band, the source of Brummie supremacy and more!

Another strike for the Birmingham Noise Corps! As much as the bands are entities in their own right, how much unity of purpose do you think their is between Napalm Death, Anaal Nathrakh, as well as bands like Fukpig and Benediction too? Do you think the bands draw energy and inspiration from each other?

Shane Embury: “Well, Benediction are, of course, some of my oldest friends from the Brum scene – and where Barney originally came from. I don’t see those guys as much anymore but there's certainly an unspoken bond. The Fukpig guys are madmen, but I get off on their energy. Nathrakh, for me, well they came along at a very important time I think for the Birmingham scene, and melded the older and new scenes together. Mick is insanely talented and I connect to where he is coming from completely and through our conversations over the years, really. There’s a lot in common with how we grew up musically, and how we feel extremity should be executed in music!”

You’ve played in Anaal Nathrakh with Mick before, but what did you learn working with him in BTMTW, and what do you think marks him out as a musical collaborator and songwriter?

“Mick is adaptable at a drop of a hat and that’s good; nothing is ever set in stone and there’s a looseness to the noise, which is good. He knows when it all comes together it's gonna hit the right spots and that’s how I am too, really. It's having vision for the final sound of the album which not everyone can have in this scene. When you click with someone on many levels without having to try thats a bonus.”

With Mick living in LA these days, The Infinite Mirror of Millennial Narcissism doesn’t sound like it was recorded across continents. How did you overcome the distance to create something so visceral?

“We started the process in Birmingham a few years ago and it kinda stayed as it was for a while; there are parts we never finished as we pondered on just what the record needed to be. I think at first we envisioned some mad grind 2112 record – which I think we should do on the next one – but ultimately we decided to keep this one to the point. Mick had his mind set on the sound for the record, which I was happy with. I think Duncan recorded some of his vocals in Birmingham and some in LA if I’m not mistaken.”

The album title sounds like something Charlie Brooker would come up with if he was in an extreme metal band. What’s the rough outline of what you were aiming at with the title, and is it a theme that runs throughout the record?

“I write a lot when I’m on tour – lyrics and paragraphs from random thoughts that come in my head – and then gather them all together and every so often piece them together like jigsaws and then decide what I think I am trying to say!

"There were probably lots of meanings at different times for the songs on this record but I think especially since the lyrics were written when I was still drinking, there’s a lot of confusion at entering another decade of my life – looking towards some sort of end or meaning to the life I have been privileged to lead. Will there be any answers beyond the void and if there isn’t, who is accountable for that since all of us spend our lives searching for meaning… once we are gone, are we gone?”

What’s the slowest-paced musical project you’ve ever been in?

“A good question… There’s a lovely project coming out soon with my main man, [Napalm Death production guru] Russ Russell, which will be slowest thing I have done – but equally as mind-fucking as everything else I do.”

And grab a digital copy of The Infinite Mirror of Millennial Narcissism here!