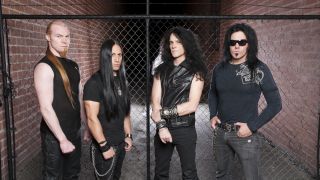 What a strange year it had been… To many, 1993 represented the absolute peak for the death metal scene but also when slowly but surely, things started to go downhill all the way through the rest of the decade. If the genre was no longer mocked upon by critics or regarded as ‘noise’ by the most conservative fringe of the metal crowd, but actually now respected as a valid commercially viable movement, it was starting to lose focus. Taking advantage of the high demand from the ever-thirsty growing legions of fans, B-series bands were now allowed to crash in what was until then a ‘VIP Only’ party. Yet in the back, some of its leaders were already on their way out, such as Death’s Chuck Schuldiner that was already drifting away from the gore imagery and vicious riffing in favour of something a bit subtler and musically challenging. Or Autopsy, who were showing signs of fatigue and gasping for air. But not Morbid Angel. Of all years, it’s was in ‘93 that some would say the ultimate death metal band decided to go against the grain and release their vilest and most straight-forward record, Covenant.

On paper though, those were tough times for the Floridian death masters. Released two years prior, their very versatile and quite atmospheric second album Blessed Are The Sick – especially next to the juggernaut and bona fide classic that was Altars Of Madness – hadn’t gone down that well with everybody, a small yet loud part of their fanbase expressing their concern that their thirst for experimentation took too much away of their aggressive side. Adding insult to injury, second guitarist Richard Brunelle had to be sacked in late ’92, allegedly for substance abuse, and wasn’t replaced, reducing the band to its core line-up of David Vincent, Trey Azagthoth and Pete ‘Commando’ Sandoval. Yet, while some of their peers were already starting to question the genre’s ability to renew itself, they answered the only way they knew how: by striking as hard as they could.

Although if you listen nowadays to David Vincent, whose intense and gravelly voice down the phone from his Floridian home is still instantly recognisable today, none of this was prepared…

“The way you put it, it sounds as if we had planned all this but believe me, it wasn’t. We were very introverted when it came to our creativity so we never paid attention to what was happening in the scene, we still don’t as a matter of fact. See, we don’t have a formula: Blessed Are The Sick was different from Altars Of Madness and Covenant was different from both of them. We do what we’re in the mood to do at the particular time and that album was no different.

“But the truth is, we’ve come to that point of our career where it’s getting really hard to come up with a setlist, especially when we’re playing festivals where we have to do 45 minutes for instance. And whatever we do, there’s always going to be a fan afterwards coming to us and saying that even if he or she liked the show, he or she would have loved to see us play this song or this song that we omitted. If we were to play all the stuff we’re requested, we would need to do four hour gigs! So from that album, we’ve been playing Rapture and God Of Emptiness for what seems like forever because they were kind of the singles if you will, and our fans particularly love them. I mean, when you go to see Judas Priest, you know they’re going to do Breaking The Law right?”

Vincent says that this anniversary tour was inspired by an unlikely source:

“I went to see Savatage last year when they were doing those special shows where they were performing their 1987 album Hall Of The Mountain King in its entirety, along with few extra songs and I really thought it was a very cool thing to do. And since 2013 marked the twentieth anniversary of Covenant, we thought about doing the same thing and announcing it beforehand so those attending would know what to expect. Plus one could say it’s a really treat to the diehard fans because some of those songs we haven’t played since the original tour, like Vengeance Is Mine. Others like Lion’s Den we simply never did live! So in late 2013, we went on our own with no opening band in the US doing this and it went over really, really well. All the reviews were great, all the fans seem happy so next thing we knew, we were getting calls from Australian promoters asking to do the same. Then the phone rang again but this time it was Europe begging us even though it took us, literally, a whole year to bring it over here.”

Like their two previous records, Covenant was recorded at the famed Morrisound Studios in Tampa, Florida. But for the mix, the band made the unusual choice of Fleming Rasmussen, the Danish then 35 year old producer/engineer who had made a name for himself working with Pretty Maids, Rainbow and of course, Metallica for both Ride The Lightning and Master Of Puppets.

“We wanted a different approach and Fleming proved to be a treat to work with,” says David. “Besides, he was there from the beginning. He even came in earlier than scheduled so he could attend few of our rehearsals prior to us entering the studio. Ultimately, he turned out to be pretty meticulous, especially on how the drums should sound. Then we did both the vocals and guitars on our own and Trey and I flew to Copenhagen to mix the whole thing with him.”

Besides a new recording of Angel Of Disease (written in 1985, it was originally recorded the following year for the Abominations Of Desolation album that remained unreleased until 1991), David remembers that Rapture was the first song written for the record and that besides being “an obvious opening track”, it kind of “set the tone for the rest” whereas the super-heavy and album closer God Of Emptiness was “almost like a vision. I had a dream that awoke me up in the middle of the night and I literally then on the spot wrote that song, humming my ideas into a small tape recorder.”

For the first time, the only time, they choose a picture as a cover, a perfectly staged nature morte designed in collaboration with the band and shot by Martin Nesbitt, a then Earache employee, that was supposed to reflect its philosophy.

“We wanted something that was solemn and sort of like… (he pauses) Not a rulebook per se but it had to suggest the idea of a pact, an allegiance if you will. Overall, we wanted something timeless and about commitment. We felt that this record being what it was, who we were and its subject matter, it was like our covenant to ourselves and to ourselves. And as a bonus, if you look closely enough, you’ll find many little details that are references to a specific lyric of song from that album included in there.”

At the time, as extreme as it was, Covenant had received surprising supports from both Warner Bros. with whom the band had just a distribution deal in the US, and MTV that put the classy black and white videos of Rapture and God Of Emptiness on heavy rotation:

“Those were the times when labels were still living the high life and they thought nothing of spending too much money on good videos,” David muses. “They were connected to each other, although shot six months apart and we had the same director for both of them named Tony Kunewalder. He was a very artistic guy that wasn’t into metal at all but he was a pleasure to work with. The weirdest part is that soon after the God Of Emptiness shooting, he died in a fire on a set of another video soon afterwards so it means that was one of the last thing he ever did.”

When asked about the impact Covenant had in retrospect, Vincent confesses that “it was, indeed, a very important record for us. We got support from MTV and to tour with Black Sabbath and Motörhead in early ‘94 in places we had never played before while a new wave of aggressive music was coming out. I think that overall, it helped us reach a whole new audience. Without Covenant, we wouldn’t be where we are now and we’re proud that it has stood the test of time like it did.”

Catch Morbid Angel on tour playing Covenant in its entirety at the following dates: