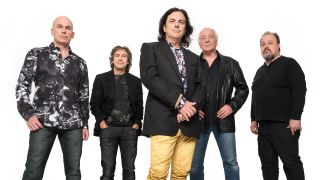 Few bands have had such a gloriously sprawling career as Marillion. Since forming in the sleepy British town of Aylesbury in the late 70s, they’re been standard-bearers for the prog scene, bona fide pop stars, a deep and thoughtful rock band, music industry outsiders and bona fide survivors.

During that time, they have recorded dozens of classic songs, ranging from mystical epics based on ancient folklore to sinewy modern rock that wouldn’t sound out of place on a Radiohead record, the latter are a band who owe an undoubted debt to Marillion, even though they’d rather chew off their own feet than admit it.

Marillion’s career can be divided into two distinct parts. For much of the 80s, they were fronted by Scottish firebrand Fish, a man who sat squarely in the long tradition of boozy Celtic hellraisers. During that initial era, Marillion went from being celebrated/criticised as the leaders of a new generation of progressive rock bands to fixtures of the pop charts via such songs as Kayleigh and Sugar Mice.

Fish’s departure in 1988 freed the band up to shake off the baggage of their past, even if few expected them to survive the loss of such a talismanic figure. But with new singer Steve Hogarth on board, they underwent a gradual top-to-bottom overhaul that repositioned them for a new era. Classic albums such as Brave, Afraid Of Sunlight, Marbles and 2016’s politically-charged Fuck Everyone And Run (F E A R) showed they were more relevant than they’d ever been, while 2001’s ground-breaking Anoraknophobia pioneering the crowd-funding model that revolutionised the music industry.

But it all boils down to the songs – which is why we’re here. We’re asking you to vote for your favourite Marillion song ever. Will it be from the Fish years or a Hogarth-era tune? Will you go for an epic prog blowout like Script For A Jester’s Tear or a slice of effortless modern rock such as Beautiful? Is it one of the big singles that floats your boat, or are you heading straight for the deep cuts.

We want to hear what you have to say. You’ll find a complete list of tracks below, including B-sides and songs only found on compilations (though no demos or bootleg tracks).

So, what is the best Marillion song ever? Over to you…