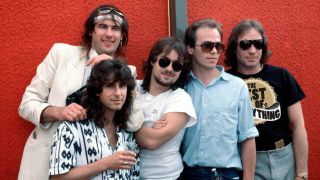 Given that Fish only fronted Marillion for seven years, the legacy from that period is a hefty one. Whether recording shorter, intelligently written songs bordering on “pop” or creating unrestrained, progressively complex and compelling tracks, there’s isn’t a weak album among the four he recorded. Lyrically, those albums were also high points, with the character of the poetic, romantic jester being one that Fish delighted in creating. Musically, the band were adventurous from the outset and those early Genesis comparisons soon faded as Marillion created their own, assertive musical identity.

Market Square Heroes (single, 1982) Their debut single, Market Square Heroes was already a live staple with the band having spent long months on the road building up their fanbase. Although this studio version sounds rather fragile now when compared to recent, more exhilarating live renditions, it embodied the early Marillion sound – a mix of 70’s progressive rock and hard edged lyrics that would soon become their trademark. With swirling keyboards, Steve Rothery’s distinctive guitar, and that voice, it remains a high-spirited and feisty track.

Grendel (B-side, 1982) Loathed and adored in equal measures, this 17-minute b-side attained an enduring cult status amongst the band’s fans. Yet it provided an insight into the band’s mindset and musical ambition. Expansive and consummately performed, there are glaring musical spectres of early Genesis (specifically Suppers Ready) but despite such influences, the interplay between guitars, keyboard and bass was so proficient that in 1982 it was obvious Marillion had a future, even if the fairy tale lyrics were something they’d rapidly dispense with. The look of facial terror on the poor sod Fish pulls out of the audience in this clip is also priceless.

Script For A Jester’s Tear (Script For A Jester’s Tear, 1983) The title track of the band’s debut album, the song introduced the now familiar figure of the ethereal Jester who would, in some form or another, appear either visually or lyrically on all of the Fish-era releases. Ascending through moments of mellow brooding, through to the exuberant finale, it’s a lavish track with another inspired Rothery solo. The lyrics hinted at passionate, lonely bed-sit poetry and would find accord with many of prog rock’s more cerebrally minded listeners.

The Web (Script For A Jester’s Tear, 1983) Continuing the forlorn lyrical theme, The Web was yet another mesmerising song from their debut, crammed with rampant melancholia and Fish’s heartfelt, semi-autobiographical thoughts. Live, The Web will always be remembered for the Fish’s manic, dramatic demolition of that ever-present in any bed-sit or student flat – the rubber plant. Although the track would ultimately vanish from their live sets, to this day it retains a certain sparkle. This clip also captures drummer Mick Pointer’s final live appearance with the band.

Garden Party (Script For A Jester’s Tear, 1983) Written as a mocking retort to some of the characters Fish encountered when visiting a girlfriend at Cambridge University, this was the single which would create a discernible buzz around the band. The keyboards and guitars trade old school progressive blows, culminating in an uplifting finale. The accompanying video also contradicted mainstream press claims that the band were stale, dreary, humourless musicians, even if they did have tame the lyrics down for this single version.

Fugazi (Fugazi, 1984) Named after slang used by American troops in Vietnam and meaning “all fucked up”, this title track illustrated the progress the band had made since their rather fragile sounding debut album. A superb song in every aspect, from the driving bass, seismic drumming and trademark sparring between guitar and keyboards, it regularly — and seamlessly — changes pace and direction. It also captures Fish at his most wordy and thought-provoking, with lines such as “Caress Orphelia’s hand with breathstroke ambition” adding to the song’s mystique.

Incubus (Fugazi, 1984) Described by Fish as “probably my all-time favourite from seven years with the band”, it’s lyrically voyeuristic and at times almost seedy, yet that intensity is equalled by the inspired musical backdrop. Whether the explosive introduction, the almost funereal middle section or euphoric conclusion, it’s a highlight from an often overlooked album. The band were notably vocal about the track’s production, claiming that the nuances had been stifled and that it was only a shadow of that they’d hoped for, which sets the mind racing as to how incredible it could have been.

Kayleigh (Misplaced Childhood, 1985) The song that changed everything for the band, Kayleigh was written about Fish’s ex-girlfriend and soon became the sound of the summer in 1985. The perfect pop song, with heartfelt lyrics, catchy chorus and idiosyncratic Steve Rothery solo, it peaked at number two in the singles chart and led to appearances on Top Of The Pops and Wogan – unthinkable even two years before. It may be the millstone around the band’s neck (to this day, the gold single awarded to the band is displayed on the toilet wall in their recording studio), but it made them household names.

Incommunicado (Clutching At Straws, 1987) The lead single from Clutching At Straws –­­­­ an album that dealt with the romantic blend of writer’s block and alcohol – it was an upbeat track that lifted some of the darkness. Influenced by some of The Who’s rockier moments, it’s an energetic romp and a barely concealed reference to getting pissed. The keyboard parts are probably some of Mark Kelly’s finest moments, and the promo video matched the levity of that Garden Party.

Torch Song (Clutching At Straws, 1987) An immensely atmospheric drinking song, Torch Song remains mesmerising despite some of the bittersweet lyrics. Written from the perspective of a fictional writer, “Torch”, (in reality, a barely disguised tale about Fish), it may lack some of the band’s more triumphant, overtly progressive moments. There are no searing guitar solos or playful keyboards, but there’s a mesmerising, organic poignancy that fills the song – aided by references to Jack Kerouac. The perfect, late-night, solo drinking companion.

Sugar Mice (Clutching At Straws, 1987) Quite possibly the finest song written by Marillion during the Fish era, it was written in a Milwaukee hotel room after what the singer described as “a bad phone call home to a very upset girlfriend”. Yet with Fish’s relationship with the band also deteriorating, it’s a tale of contemplation about the future. The mighty guitar solo was recorded in one take by an angry Steve Rothery after producer Chris Kimsey had suggested his playing was lacking focus and passion.