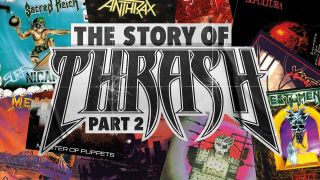 In Part One of our Story of thrash metal, we spoke to innovators Exodus, Anthrax, Sodom and Testament about the birth of a genre that had remained resolutely underdog, mocked and misunderstood by the wider rock world from 1983-85, but it was rising fast, and a hierarchy of world-class trailblazers was emerging...

Thrash broke in 1986, and its first strike was the most deadly. Metallica’s Master Of Puppets set new standards that still resonate today, crowning the quartet’s rapid progress from pimply NWOBHM covers band to epochal giants of cutting-edge metal.

“It was pretty much the definitive musical statement from that line-up, and it felt like it,” Kirk Hammett told Metal Hammer in 2011. “Every song we came up with was just like the greatest thing.”

The album’s Danish producer Flemming Rasmussen confirms how special the album
felt from the start. “We really tried to make everything actually better than we were capable of. We knew we had a bunch of really good songs, so we put the bar up really high,” he asserts.

“Musician-wise, they were a million times better because they’d been on the road for a year and a half.”

However, it says much about the robust state of thrash in its watershed year that this colossal benchmark didn’t overshadow the whole 12 months. Hot on Metallica’s heels, Kreator unleashed their gleefully homicidal Pleasure To Kill, Voivod continued their leftfield trajectory with Rrröööaaarrr, and Flotsam & Jetsam released blistering debut Doomsday For The Deceiver (featuring the propulsive bass of gifted newcomer Jason Newsted).

Robb Flynn’s first band Forbidden Evil later became Forbidden, and gave future Slayer/Testament/Exodus drummer Paul Bostaph his thrash apprenticeship. By then, Robb had decamped to Vio-lence, another Bay Area band releasing a demo of future classics in the summer of ’86.

After that exhaustive explosion, thrash’s focus shifted. Slayer had attained the genre’s pinnacle and, alongside the extremities of Celtic Frost, Kreator, Sodom and Possessed, were inspiring the nascent death metal scene in Florida to new levels of barbarism.

Thrash was shedding its underdog status, evolving into a serious, acclaimed commercial force, and a ‘Big 4’ of scene leaders emerged as Metallica, Megadeth, Slayer and Anthrax broke through to metal’s mainstream. Anthrax mastermind Scott Ian has no doubt who to credit.

“What really exposed this new sound to a massive rock audience was Metallica getting the support slot on the Ozzy tour, playing to sold-out arenas,” he affirms.

“Every night, 10,000 people who never heard Metallica watch them open for Ozzy
and then go buy their records. Then they’re looking around, ‘So there’s Metallica, what else is there?’ Then there’s that trickle-down thing, so when we go into ’87 and we’ve got Among The Living coming out: right album at the right time!”

Among The Living, released in March, advanced thrash as a substantial musical form, but the success of its tour took Anthrax by surprise. Scott crunches the numbers.

Another hardworking band surfing a wave in ’87 were Testament. Expectations were already high for the Bay Area quintet, after a label bidding war and fearsome word-of-mouth live reputation, and their debut, The Legacy, was another key album in thrash’s development towards more sophisticated technical and melodic ideas.

It was their first of five albums in as many years, recorded in between world tours supporting Megadeth, Anthrax, Judas Priest and Black Sabbath, with pressure from major label Atlantic keeping them constantly generating material for the next cycle.

In 1988, Metal Hammer grilled Testament about how they were handling ‘next big thing’ accolades since their debut. “We knew how high the expectations were after The Legacy, so we were pretty nervous at the beginning,” admitted 26-year-old singer Chuck Billy. “We also knew that we couldn’t let all this pressure drive us round the bend.”

As the 55-year-old Chuck remembers, record company pressure soon extended from backbreaking work schedules to interference in songwriting. “We had Atlantic A&R guys who were always pushing us for the new radio song or power ballad,” grumbles Chuck.

“I don’t know if that helped or hurt our career, but you’d look back and think Testament were a ballad band, because that’s what was represented by Atlantic – the more commercial, polished songs. They never picked a thrash song to do the videos for!”

Still, rather Testament’s predicament than poor old Exodus. After label hassles, delays and the ousting of much-loved frontman Paul Baloff, the original Bay Area thrashers were struggling to keep up with the pack.

In November ’87, Metal Hammer opened a feature with the harsh intro: “If there is one band that’s walking on this planet that completely missed the boat, that band is Exodus.” By the end of the 80s, Exodus were lining up a deal with major label Capitol, but it wasn’t a natural fit (for more on this, see Part Three).

In the feeding frenzy of the late-80s, every record company wanted the new Metallica, as derivative, underdeveloped garage bands were plucked from obscurity and ill-fatedly groomed for stardom.

A genre founded on uncompromising underground principles didn’t take well to corporate interference, and many thrashers in ’88 dared to express fears that Metallica, Slayer, Anthrax and Megadeth had failed to meet expectations with each of their major label albums that year, while ravenous hopefuls like Death Angel, Forbidden, Vio-lence, Heathen, Sacred Reich, Holy Terror, Xentrix and Annihilator were snapping at their heels.

“There was camaraderie, because we were cut from the same cloth, but it’s like being in a room of cousins; you’re still competing against them!” he cackles. “You didn’t go in to lose, you went in to win. So it was a very healthy type of formulation; I think it made all the bands better.”

Sodom’s Tom Angelripper concurs. “There was rivalry around the bands but without any malevolence or fights,” he remembers. “We were all good friends and spent a lot of time together, having parties and celebrating the music.”

Germany had much to celebrate in this period. If the Big 4 were stepping down a gear, ripping Teutonic volleys like Sodom’s Persecution Mania and Agent Orange, Kreator’s Terrible Certainty and Extreme Aggression, Holy Moses’ Finished With The Dogs and Destruction’s Release From Agony displayed increasing confidence and mastery of craft.

“We were blown away by the opportunities to become a touring band – it was so exciting,” enthuses Kreator frontman Mille Petrozza of thrash’s late-80s heyday. “We brought that excitement into the studio, and you can hear that. We wrote furious, in-your-face stuff, but it was tighter than before, so we were on a good path.”

However, the most fascinating innovations in this period were spearheaded by invaluable Canadian world-builders Voivod. Many thrash pioneers identify Voivod as the band that should have been huge. “I thought they were really poised to grab the golden ring of this,” ponders Bobby ‘Blitz’ Ellsworth, while Mille adds, “In my opinion, they were the biggest of us all.”

“I notice there are a few bands who’ve changed their musical direction towards something more progressive, which I think is an influence they took from Voivod,” commented Voivod drummer Michel ‘Away’ Langevin in Metal Hammer in November 1989, “but I think we’re still alone in this kind of vein.”

It was awesome stuff, but it remained pretty niche, whereas one far-reaching LP in 1989 unexpectedly proved a profound critical and commercial smash. After a sloppy infancy, Brazilian teenagers Sepultura had well and truly got their shit together to deliver the incisive masterwork that their new label Roadrunner had been hoping for: Beneath The Remains.

In a review in November ’89, Metal Hammer gushed: “Sepultura have not only progressed considerably as musicians, they are also one of the best live acts on the entire thrash scene and can stand the comparison with Metallica, Exodus or even Slayer no problem.”

Beneath The Remains seemed to set the seal on 80s thrash while pointing the way to even hotter intensities for the 90s. But with Sepultura making the rest of the scene look tame and mainstream by comparison, how much of a future was there for thrash metal as it entered its second decade?