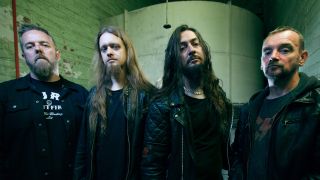 Hailed back in the '90s as the UK's answer to Metallica, after two kick-ass all out thrash albums Xentrix attempted a reinvention before being left by the wayside two decades ago, thanks to the rise of grunge.

Speaking to Hammer recently, guitarist and chief songwriter Kristian ‘Stan’ Havard revealed: "It really did feel like we were heading onwards and upwards in the early days.

"On the second album in particular, we got to go to Europe and play with Annihilator. We were on a tour bus, so we’d made it! We were set for life and we’d be rich beyond our wildest dreams! Obviously that didn’t really happen, but it was still a great time. It all happened so quickly, and it was strange how quickly it all stopped.”

He continues: “As soon as the scene started to die, there was nothing left. Sabbat went, Onslaught went, Acid Reign went… there was nobody left and everyone started to do other things like going funky or whatever.

"We tried to change as well. We tried to make ourselves more accessible, maybe, and to be cleverer in our songwriting, but it didn’t really work for us. But it’s easy to look back and say that, isn’t it?”"

But all's well that ends well, and the the Lancashire thrashers are back, with a new vocalist (original Xentrix megafan, Jay Walsh) and a brand spanking new album – their first record in 23 years – Bury The Pain, and it's exactly what hardcore, old-school fans could have asked for.

The band comments: "The first Xentrix promo video for over 25 years features the band playing in the woods black heart of Northern England. We really wanted the video to introduce everyone to new singer Jay Walsh."

Now, the band are exclusively premiering their official video for title track Bury The Pain with us. Check it out below:

Xentrix's new album Bury The Pain is out now via Listenable and available to purchase here.