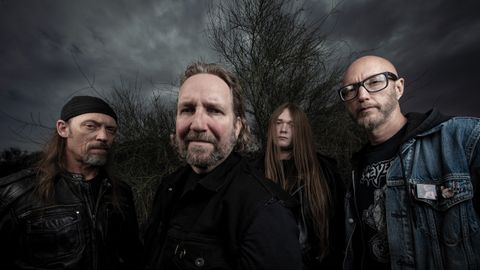 1996 found heavy music deep in the throes of an identity crisis. Grunge had put a steel-toed boot into the side of hair metal and kicked the entire genre into the Canyon Of Irrelevance.

Metallica had left diehards feeling angry and betrayed when they released a radio-friendly batch of jams called the Black Album.

Meanwhile, a bland, flavourless porridge called ‘alt-rock’ clogged the airwaves. It was hardly surprising that 1996 would see the last new Sacred Reich release for a very long time.

Formed in Phoenix, Arizona in the mid-80s, Sacred Reich made their bones with a hyper-aggressive style of politically charged thrash that stood in defiant opposition to the over-polished commercialism of the mainstream.

1996’s Heal marked their last studio outing until they broke up in 2000, eventually reuniting in 2006. It would take another 13 years before the quartet would release Awakening, their first collection of new music in 23 years. Spoiler alert: it was worth the wait.

The titular opening track reveals the thrash veterans to be operating at the absolute peak of their game with a siege of growling riffs, hard-driving tempos and the kind of blazing fretwork that makes grown men squint and clench their teeth in assent.

The return of drummer Dave McClain (ex-Machine Head), has infused the material with both precision and velocity, while new rhythm guitarist Joey Radziwill piles kerosene-soaked riffs onto the razor-sharp attack of guitarist Wiley Arnett.

Vocalist/bassist Phil Rind sounds as hale and vital as he did 25 years ago. From the unrelenting power grooves of Salvation to the old-school throwback, Killing Machine, Awakening unfolds with the barbarous rage of a street fight.

And yet, behind a steady campaign of mouth-watering riffs and shout-out choruses, these eight tracks rank among the catchiest that the band have ever composed. Thrash metal is alive and well, and with their latest campaign, so are Sacred Reich.