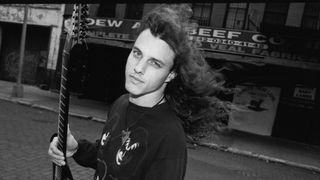 Florida may be widely known as The Sunshine State, but it’s also been a reliable breeding ground for tons of top-notch heavy music, much of which will cheerfully scalp and gut you with maximum ferocity while Satan cackles maniacally in the background.

That said, Florida’s not just the world’s number one death metal destination, and its contribution to the broader metal scene is not to be underestimated. Here are 10 of the best bands to spurn the beach in favour of massive riffs and ear-shredding blood’n’thunder.

Brutality scholars may argue about which band were the first true death metal band, but few could dispute that Chuck Schuldiner and Death towered over the entire scene for the entirety of their all-too-brief existence.

From the primitive, pioneering savagery of 1987’s Scream Bloody Gore to the mind-bending complexity and ambition of The Sound Of Perseverance (Death’s final album prior to Chuck’s untimely passing at the age of 34), they were always a couple of steps ahead of the game and audibly, thrillingly devoted to pushing extreme metal into uncharted territory.

From their explosive 2005 breakthrough with Ascendancy, and the triumphant UK live shows that followed, Trivium made light work of becoming part of the heavy metal furniture.

Despite never settling on one definitive sound, the band have proved themselves to be (a) fully paid-up metalheads with a laudable sense of history and (b) genuinely likeable people. Every album they release seems to polarise opinion, and yet they remain one of the best loved bands in our world. Plus, of course, Paolo’s cat is an internet legend.

Has anyone ever sounded more utterly murderous than Hate Eternal did on their classic second album King Of All Kings? We suspect not. Already a death metal legend thanks to his lengthy tenure in Morbid Angel and his day job as one of the scene’s most respected producers, Erik Rutan formed his own band to push the boundaries of extremity. Over the course of six studio albums, Florida’s fastest have simply redefined what it means to rip people’s faces off.

Although largely AWOL between the release of seminal 1993 debut Focus and its extraordinary follow-up Traced In Air, Cynic never lost the legendary status facilitated by their first musical efforts. Ostensibly part of the Florida death metal scene – members Paul Masvidal (vocals/guitar) and the recently departed Sean Reinert (drums) were famously members of Chuck Schuldiner’s Death during the Human era – they have always made fervently progressive and otherworldly music that defies description and brings great colour to heavy music world.

It would be generous to say that Deicide’s catalogue is in any way consistent, but in terms of defining the sound of Floridian death metal in the early 90s, few bands are either as iconic or as notorious.

Led by mischievous blackheart Glen Benton, the band’s first three albums – Deicide, Legion and Once Upon The Cross – are all stone cold classics, while more recent efforts like The Stench Of Redemption and To Hell With God have sustained the band’s reputation for ferociously blasphemous brutality. At their worst, they’re a chaotic shambles. At their best, they’ll scare the living shit out of you.

In many ways, Iced Earth are the closest thing America has to an Iron Maiden. They have a dedicated, stubborn and ambitious leader – guitarist Jon Schaffer – and a sound that is both joyously thunderous and pointedly melodic.

More importantly, Iced Earth’s cutting edge update of old school principles has made them one of the most consistently popular and lauded traditional metal bands of the last 30 years, due in part to the brilliance of albums like Something Wicked This Way Comes, The Glorious Burden and Dystopia, but also to the fierce clarity of Schaffer’s creative vision. Iced Earth are modern metal heroes.

Still one of the heaviest bands on the planet, Obituary’s coruscating barrage of mid-tempo grooves and hellish discordance made them one of death metal’s most prominent and influential bands way back in the late 80s.

Everything they have released, from their 1989 debut Slowly We Rot to the new tunes on this year’s Ten Thousand Ways To Die, has crushed like a runaway mutant steamroller, and vocalist John Tardy remains one of extreme metal’s most distinctive and gruesome bellowers. Best party banger? Chopped In Half. Obvs.

Formed in Florida in 1978, Savatage are hugely important within the worlds of power and progressive metal but less frequently celebrated (particularly in the UK) than their colossal contribution deserves.

Albums like Hall Of The Mountain King (1987), Streets: A Rock Opera (1991) and Poets And Madmen (2001) repeatedly upped the ante, both in terms of technical prowess and the startling levels of ambition that founder members Jon and Criss Oliva (who sadly passed away in 1993) seemed to wear as a badge of pride and principle. They split in 2002 but a reunion has long been rumoured. Fingers crossed.

The correct answer to the question, ‘What is the greatest death metal album of all time?’ is this: Altars Of Madness by Morbid Angel.

Thanks to the unhinged genius of guitarist Trey Azagthoth, the imperious menace of original frontman David Vincent and the blistering intensity of original drummer Pete Sandoval, Morbid Angel annihilated all-comers back in 1989 and despite numerous line-up changes, they exude a fearsome charisma to this day.

Even the wildly eclectic, electro-grind madness of 2011’s Ilud Divinum Insanus album – loved by many, loathed by many more – hasn’t dented the band’s regal allure. If you love death metal, you love Morbid Angel. Simple.

Diehard purveyors of ultra-opulent power metal for 25 years, Kamelot have not only punctured Europe’s dominance of the genre, they have also forced it to raise its overall game.

Albums like 2003’s conceptual masterwork Epica and its bold, inventive follow-up The Black Halo (2005) blurred the lines between glittery pomp and a more cerebral, progressive approach, while the band’s current line-up – featuring vocalist Tommy Karevik – continue to aim higher than most of their peers, as shown on 2015’s majestic Haven album.