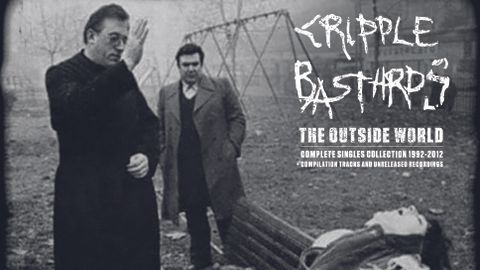 Before being a record label, F.O.A.D. was a crossover/ thrashcore fanzine totally immersed in the tape-trading scene getting crazy over 12th-generation tapes of Cryptic Slaughter rehearsals. That mentality shines through most of their releases, each of them being like a test on how far your fandom can take you. The Outside World offers a characteristic challenge: five LPs, two CDs – plus an extra split EP with Yacopsae for the limited version – and two books full of flyers, pictures and lyrics for a total of 362 tracks, dating from 1992-2012. Basically, it’s everything Italy’s most enduring grindcoremachine has committed to tape, bar their five full-lengths, over those two decades. But this five-hour blastfest feels more like a celebration of a certain idea of what the word ‘underground’ means than of the band themselves, especially since Cripple Bastards have taken a few left turns over their career. You’ll probably end up listening to their earliest material only once and skip directly to their post-00s, far more convincing rumblings. But you can’t help but be impressed by how their conviction has remained unshakable, the list of the bands they’ve done splits with, which reads like a who’s who of the genre’s A-list, and overall, the volume of music on display here. This is like a monument erected in grindcore’s glory.