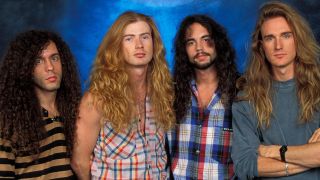 In 1990, Exodus released a telling song called Thrash Under Pressure. Hitting out at those who derided the genre, and affirming their commitment to keeping it loud and fast, its lyrics read: ‘We’re proud of what we do, call us thrash we won’t argue! / We’ll never be ashamed if our children ever knew / Forever we’ll confirm and we’re flattered by the term / Those embarrassed by it never should have tried it!’

The original Bay Area thrashers were defiantly confronting the elephant in metal’s room: with death metal upping the ante underground, and grunge dominating the mainstream, their genre of choice was on the way out. “That song was our response to the fact that every thrash band we knew were no longer thrash bands in interviews; they were all hiding from their past,” explains Exodus guitarist Gary Holt.

Yet at the time, 1990 felt like a second Golden Age to the fans, with career-highlight releases from Megadeth, Anthrax, Slayer, Kreator, Annihilator, Forbidden and Vio-lence. Meanwhile, the Clash Of The Titans tour brought together Slayer, Megadeth, Testament and Suicidal Tendencies for a celebratory run in European arenas.

The North American leg in 1991 saw Testament and Suicidal Tendencies swapped for Anthrax plus – incongruously – grunge upstarts Alice In Chains, this mismatch seemingly clear evidence of the music industry’s shifting priorities. Even so, Anthrax axeman Scott Ian didn’t get any ‘end of an era’ vibes from the event. “Not at all, it felt like we were crushing,” Scott laughs. “Like the future was ours and we could write our own tickets from here on out. That’s what it felt like in the moment.”

In August, Metallica threw down their divisive but humongous Black album, catapulting them way beyond genre boundaries and smoothing the way for other maturing thrash pioneers to reassess their musical priorities. Kreator frontman Mille Petrozza was interviewed for a Metal Hammer thrash special in 1992, promoting Kreator’s sixth album, Renewal – a bold departure from their sound. “Either we come up with new ideas or the apocalypse is just around the corner,” the 24-year-old Mille stated. Today, Mille remembers feeling restricted by the confines of thrash after 10 years at the coalface. “We saw potential in experimenting and adding new influences,” Mille reasons.

“I wouldn’t say we outgrew thrash metal, but I got tired of being labelled. You’ve got to understand, at the time there were so many shitty thrash bands jumping on the bandwagon. It was so trendy, I was bored by it.”

Inevitably the bubble burst, and with cruel haste thrash became yesterday’s news. “People were thinking, was this thrash thing just a phase?” recalls Mille. “I always took it seriously, I never thought of quitting, but the world around me fell apart; lots of bands split up. Grunge was coming in, being a metalhead wasn’t in fashion. I saw a lot of bullshit in the 90s. MTV still had a huge influence, the industry was dictating the musical taste of the people, but some bands kept fighting.”

Even the biggest names at the top of their game were subject to corporate intrusion. Megadeth were global metal superstars, but still the fat cats were trying to tell Dave Mustaine what to do.

“We were told that with Nirvana and all the alternative scene coming out, we needed to do that,” Dave sighs. “They changed our logo; they started telling us we need to wear flannel and grow facial hair. I’ve got a red beard, man, I don’t want facial hair! Every time a new Capitol president came in, it was like your mom getting remarried, and you are the red-headed stepchild. And they don’t wanna build Megadeth, they wanna build the next Nirvana or Pearl Jam…”

Dave stops himself mid-flow and recalibrates. “But it was by a miracle that with all the talented players out there, I made it. I never wanna lose sight of that.”

Also in Metal Hammer’s 1992 thrash special was Gary Holt, promoting Exodus’s fifth album, Force Of Habit. Some rethinking had clearly gone on in the Bay Area, too. Asked what he’d been listening to lately, Gary replied: “Rap, hip hop, industrial, sludgegrind, Helmet, Ministry, Skinny Puppy and so on.”

The album was unusually down-tempo and downtuned, featuring cover versions of The Rolling Stones’ Bitch and Elvis Costello’s Pump It Up, an arty sleeve and no band logo. “It wasn’t meant to come out that way,” admits Gary of the artwork, though he bullishly defends the music. “People always said we watered our sound down on Force Of Habit, but if you remove the covers, that album’s still heavy. It’s more melodic, but I think that’s the best lead playing Rick Hunolt and I ever did on that album.”

Metal Hammer had earlier reported that Force Of Habit “could be a lot less thrashy than before. It looks like the band are following Metallica’s way of writing songs… with a more simple build-up but with a lot more ‘groove’.” This idea of ‘groove’ hung around the morphing thrash scene in the 90s, reflecting the seismic importance of Texan hell-raisers Pantera. The 80s thrash revolution had changed them from poodle-permed glam wannabes into the 90s’ most radical metal success story, their music hitting unexpectedly hard.

Even so, these were hard times for the innovators of 80s thrash. Death and black metal were thriving, and both took their cues from thrash’s innovations, but class acts like Death Angel, Holy Terror, Celtic Frost, Heathen, Possessed, Forbidden, Dark Angel, Watchtower, Holy Moses and even Exodus bit the dust – if only for a few years. There seemed two options for the surviving thrash generation: slow down, groove out, clean up and broaden the sound, or keep getting harder and more extreme.

“Many bands changed their music in the 90s,” broods Sodom frontman Tom Angelripper, one who never wavered in pursuit of thrash’s founding ideals. “They got pressure from labels to sell more and get a commercial direction. But we never changed. In these times, we released the heaviest albums ever! You have to realise, we do thrash metal because we just love it. There is no inspiration or dictation from outside. We don’t want to assimilate. We want to be free in everything we do. So we never leave our fans disappointed.”

Testament excelled at both approaches. The Ritual, released in 1992, was a melodic, accessible bestseller – just what their major label Atlantic was hoping for. However, after losing virtuoso guitarist Alex Skolnick, the quintet brought in ex-Death/Obituary man James Murphy and dropped Low in ’94; Chuck Billy’s monstrous, newfound death growl over James’s downtuned fury came as a pant-soiling shock. Unsurprisingly, “the angry record”, as Chuck calls it, was their last for Atlantic. Three years later they released Demonic, featuring Dark Angel drum legend Gene Hoglan.

In 1997, an Exodus reunion with much-loved frontman Paul Baloff had promised much but fizzled out. “We weren’t properly managed as far as taking advantage of it. We weren’t standing up for ourselves and we didn’t really care,” admits Gary. “That’s when we ended up involved in some really bad drug problems.”

Around this time, the Scandinavian black metal scene rediscovered its thrash roots. Tanked-up throwbacks such as Nifelheim, Aura Noir, Gehennah, Infernö, Bewitched, Desaster and Guillotine paid homage to the look and sound of thrash circa 1985, reaching a peak in 1998 with the uproarious debut by Swedish grave-robbers Witchery, Restless & Dead. That same year, Witchery guitarist Patrik Jensen was also behind the frantic crunch on The Haunted’s self-titled debut, another killer disc bringing back thrash fundamentals as the new millennium loomed.

In 1999, there were comeback albums from reanimated genre pioneers Artillery, Suicidal Tendencies, Metal Church, Agent Steel and Stormtroopers Of Death, plus Sodom’s blistering Code Red. But it was surely Testament who fired the starting pistol for the imminent millennial thrash revival. Welcoming ex-Slayer drummer Dave Lombardo for 1999’s The Gathering, it was a magnificent reassertion of key thrash principles at the end of a hostile decade, accelerating the momentum of a revival that had been bubbling under for a while.

“The Gathering was a great record and, I think, the turning point for Testament,” reckons Chuck. “There was just something special and different on that one. It really fired us up and gave us a new spark.”

The spark also fired up Testament’s contemporaries; in 1999, Kreator released their oddest experiment, ploddy goth puzzler Endorama. But when Mille heard what Testament were doing, it electrified his thrash synapses. “The Gathering was a huge influence,” Mille enthuses. “There was something happening, it was inspiring again to write heavy stuff. The flame was burning again!”