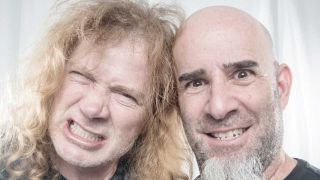 Any opportunity to get two of the Big 4 together is a huge deal, so we were delighted to be able to unite thrash legends Dave Mustaine and Scott Ian to talk about their own amazing journeys, the evolution of our world and what they think of the state of metal today. The Megadeth and Anthrax leaders have survived controversy, dramatic line-up shifts and entire scenes that have come and gone, with both their bands arguably as bignow as they’ve ever been. As usual, neither man was shy with dropping some opinion-bombs.

What do you think of where metal is right now?

Scott: “Well, it’s good! We’re still out, we’re making records, we’re selling tickets, we’re having fun in so many ways. In some ways, nothing has changed from 30-something years ago because we’re still doing the same thing and playing a lot of the same songs. The only thing that’s changed is that the audience has got a lot younger!”

Dave: “I agree with Scott that the audience is younger, perception-wise, but for me, the spirit in our bands is still very young. We love playing this music, because we love that interaction with the fans.”

What’s been the hardest time for you two as musicians?

Scott: “The three years before our first album came out. For years, the idea that someone is gonna write a cheque for you to go make your first album, and believe in this music that no one’s ever really heard before, and actually help get us going... that was the hardest time, because everything was completely unknown. I didn’t have a plan B. All I was gonna do was be in Anthrax.”

Scott: “But that initial period was hard. I was living in my mom’s apartment in Queens, sitting on the couch with my mom yelling at me to try and get a real job!”

When did your parents start to take your job seriously?

Scott: “When we did Clash Of The Titans in ’91, and we played Madison Square Garden. Which, I think for a bunch of New York kids that grew up in the city going to concerts there, that’s Mecca for me. We were the band that closed that night, so we were able to say, ‘Hey! We’ve headlined Madison Square Garden!’ My mom was backstage, and I got to have her say, ‘This was where Elvis played!’”

Both of you have been in bands that have undergone significant line-up changes. How difficult has that been?

Scott: “What band hasn’t? Any band that’s been around over 30 years, odds are they’re gonna have gone through line-up changes. It’s just the nature of it.”

But you’re the Captains of the ship. Has it been hard having that pressure on your shoulders?

Scott: “No. I don’t look at it as pressure. As much as I’m steering the ship in some ways, there’s no ship to steer if everybody isn’t on board. I’m not laying down laws and directions for people. It’s not like that at all. Everybody decides if they’re gonna do something or not, it’s very much a democracy.”

Out of all metal’s subgenres, thrash has survived in its purest form. Why?

Dave: “I think that a lot of times, when you look at most thrash tuff, it depends on who the person is that’s listening. If I’m listening to it now, it’s a completely different paradigm shift to someone who’s considerably younger than I am.”

Scott: “What we started back then with all these other bands, I just think the reason why it’s lasted so long, generation after generation, is because we created something great. We really left a mark. It didn’t just disappear. It wasn’t a trend. It wasn’t a fad. It’s music. It’s a branch on the tree of metal that just keeps growing. I mean, we did something really good back then, you know?”

Scott: “That initial foundation that we built in the 80s, it’s still really strong.”

Do you think it’s harder or easier to be a young metal band nowadays?

Dave: “It’s a double-edged sword. It’s so much easier for new bands to get their music out, but it’d be safe to bet one of my balls on the fact that Scott used to go into the same record store I did in San Francisco called The Record Well. And the fact that back then you could find a record store that’s strictly metal, and you walk in there and the person behind the counter will know you, and you can walk in and they can tell you what’s new. ‘The new Tank record’s out!’ or ‘The new Raven album’s out!’ or, ‘Dude, what do you think of the new Witchfinder General?’ And we were in there, like, ‘God damn, these are my people!’ It just feels great when you used to go into one of those stores, and you see people there that are like you. There’s not a lot of stores out there like that any more.”

So you think it’s a mixed bag for metalheads right now? What do you think of the general vibe around the scene at the moment?

Dave: “There are no more rockstars. You know what you got? You got a lot of snot-nosed kids that work at music magazines – no offence.”

Dave: “But there used to be an honour code between the bands and the music magazines. Then the internet came out and started tearing bands apart, and it became normal happenstance where people would make a story just to destroy the bands. It became more important about who the writer was rather than the bands they were covering. I yearn for the days when it was about the music and not about the reviewer.”

Has a band like Black Sabbath calling it a day given you guys food for thought about how long your bands have left?

Scott: “No, because they’re different. They’re much older. That first record came out in 1970, so it’s different. It’s over a decade before British Steel came out, so that’s a whole other game. I’ve been listening to Sabbath my whole life, but I’m realistic in the fact that eventually people have to stop, and I like the way they did it. Rather than it stopping because of something tragic or whatever, they just said, ‘That’s it. We’re gonna out now, on top.’ What better way to do it?”

Dave: “They haven’t quit. The next tour is gonna be the ‘Are you fucking kidding me?’ tour. In a world where Gene Simmons is trying to patent the horns, I wouldn’t put anything past those 60s guys.”

What advice would you give someone if they walked in here and said they were starting a metal band?

Scott: “I’d tell security to throw them out. Ha ha! Actually, you know what? So I would tell a new band, ‘Go watch Code Orange.’ They remind me of us in 1981 when all we wanted to do was bang our heads and make people listen to our music.”

Dave: “That’s what’s missing. That is exactly what’s fucking missing. These fucking new bands, these spoilt motherfuckers whose parents are attorneys or doctors, and they take every penny they’ve got and invest it in their productions, so they’ve got the big screens and the explosions and the dancing girls and the inflatables and the fucking ego ramps. They don’t know what paying their fucking dues is.”

Fair enough. You’ve both achieved so much in your careers. What’s next? Any bucket list moments left?

Scott: “I don’t know if I have something as specific, other than just keep doing what we’re doing. We’re in a good place, and I really enjoy the work, so to be able to just keep doing this at this point, making another record, two records, three records. I’ve always said that Angus Young from AC/DC is, like, 10 years ahead of me, so as long as he’s still out there banging his head, then I have at least 10 years left! And from what I hear they’re totally not done...”