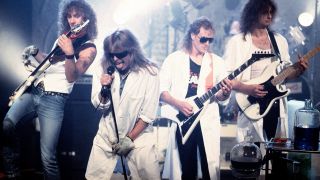 What does power metal mean to you? If it’s old American metal records by Manilla Road, Cirith Ungol and Jag Panzer then you’re reading the wrong list. Unfortunately, power metal has two distinct meanings and so WE CAN’T STRESS ENOUGH that this list focuses on the more widely accepted modern definition: i.e. explosive, over-the-top heavy metal that often sounds like the worst excesses of the Eurovision Song Contest set to skull-rattling kick drums and fret-melting, neoclassical widdling. Also not to be confused with symphonic metal or progressive metal, just in case you were worrying. We don’t make the rules, we merely adhere to them. Meanwhile, here are the ten most essential power metal albums. Listen to them loud and be happy!

Unsung heroes of European power metal, Nocturnal Rites had two secret weapons: (a) the gloriously soulful and distinctive voice of Jonny Lindkvist and (b) better songs than everyone else. You could pick any of the Swedes’ eight albums, but Grand Illusion marginally outstrips the rest, not least because it showcased a heartfelt desire to modernise the power metal sound and isn’t remotely cheesy. Honestly.

Purists may sneer at the idea that Dragonforce have more to give than remorseless speed and cheddary lyrics, but Inhuman Rampage didn’t become globally successful by accident. For all their goofiness, the UK-based international crew nailed their unique, breakneck take on power metal’s sonic rudiments in style here, and songs like Through The Fire And Flames and Operation Ground And Pound kick an insane amount of high velocity arse.

Long before the term ‘power metal’ was co-opted by the post-Helloween set, New York trad metal veterans Riot were chucking their own two-cents into the genre’s gustatory juices. Thundersteel is a flat-out power metal insurgence, brimming with blistering leads, clattering kicks and vocal notes so high that only dogs can hear them. Maybe. Either way, late, great guitarist Mark Reale is long overdue some serious credit.

Power metal’s detractors generally decry the genre as cheesy nonsense, and it’s hard to deny that they have a point. However, the best way forward is to fully embrace le fromage, and Sonata Arctica’s wonderfully bright-eyed and Disney-tinged sing-alongs amount to the heavy metal dairy farm’s twinkling zenith. Winterheart’s Guild remains their finest album: it’s an irresistibly upbeat affair and catchier than a virulent dose of shingles.

More than any other band, Hammerfall deserve credit for kick-starting the power metal explosion of the mid-to-late 90s. When this, their debut, emerged in 1997, it seemed like a stirring reclamation on old school metal values, albeit with a sugary melodic streak a mile wide. Many bands have improved on the Swedes’ formula, but this blueprint still stands up as a feast of power and fury.

Finland’s premier power metal mavens formed in the late 80s but it was almost a decade later that they really hit their stride, perhaps buoyed by a sense that the world was beginning to come round to their bombastic way of thinking. Visions is simply a classic power metal record: preposterous, slick, immaculate and bursting with killer tunes.

One of those lost classics that should have been far more successful than it was, Lost Horizon’s debut album offered explosive power metal that was giddy on steroids and cosmic wonderment. Packing a devastating punch and making their contemporaries sound a bit weedy in the process, the likes of Sworn In The Metal Wind and Welcome Back still sound ridiculously exciting (and excitingly ridiculous) 15 years later.

For many, the connoisseur’s power metal standard bearers; Kamelot have been America’s greatest exponents of the genre for 25 years. Their first concept album, Epica encapsulates everything that these diehard virtuosos do well, including countless euphoric vocal refrains, symphonic bluster and eye-watering (but oddly accessible) technicality. A gleaming masterpiece.

Arguably the genre’s most popular exponents, Blind Guardian have always been noticeably heavier and more adventurous than the vast majority of their peers. Their sixth album remains their most quintessentially power metal statement: a 66-minute concept piece based on Tolkien’s The Silmarillion, it’s a wildly cinematic and absorbing triumph for ambition and dexterity.

Inadvertently inventing the modern notion of what power metal is all about, Helloween were righteously huge in the late ‘80s and it was this, their legendary third album, that sealed the deal. From immortal anthems like Eagle Fly Free, Dr. Stein and I Want Out to the epic journey of the title track, Keeper Part 2 has been highly influential and still towers above most comparable records, nearly 30 years later.

Power Metal: The Genre That Refuses To Die!