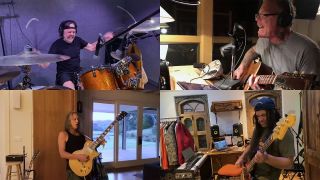 Quarantine hasn’t been great for anyone, but if it’s thrown up one good thing it’s the constant flow of spectacular lockdown live gigs and socially distant sessions bands have played to keep us – and themselves – entertained. From Metallica’s stripped-down reworking of 80s classic Blackened to Code Orange’s stellar, crowd-free launch gig for their latest album Underneath, these are best you can still watch.

Maryland’s leading rock’n’roll backwoodsmen Clutch played a special Live From The Doom Saloon Volume 1 quarantine gig on May 27, supported in almost IRL style by Crowbar, Blacktop Mojo and Saul.  Anyone who didn’t catch it on the night can rewatch it here from 4pm EST on May 28 – thought it's only available for 48 hour, with ticket money going to the charities Angel Flight and Musicares. In the meantime, you can watch Neil Fallon and the boys play a pair of short, socially-isolated sets recorded ini April.

Code Orange played a stellar launch show for their critically acclaimed Underneath album in an empty theatre in Pittsburgh. If you missed it or want to relive the performance, you’re in luck, as the blistering 13-track performance is available to watch below.

Alice In Chains singer William DuVall busted out his acoustic guitar for a livestreamed ‘confinement concert’. Which is a posh way of saying he's been stuck at home for the last 37 weeks like the rest of us.

Norwegian prog-metal kingpins Enslaved were forced to push the release of their new studio album Utgard back until later this year, which made them very sad Vikings. But wait – they made up for it with a special online-only concert appearance at Bergen's Verftet Online Music Festival. It's very good, and available to watch on YouTube.

Swedish retro-rockers Horisont and fellow Scandinavians Spiders teamed up for a livestreamed gig at Gothenburg’s Pustervik venue in mid-May. It's preserved for posterity for generations to come on YouTube.

When you-know-what scuppered Katatonia’s launch plans for tremendous new album City Burials, the Swedish prog-doomsters figured, “Bollocks to it, we’ll just play a live show at Stockholm’s Studio Gröndhal and drop in three new songs while we’re at it instead.” So that's what they did. The broadcast is available to watch via their website until Jun 15, you lucky people.

After the last few dates of their European tour were cancelled, Norwegian punk’n’rollers Kvelertak decided to stage an 80-minute social distancing-compliant show at empty Norwegian venue Artilleriverkstedet. The full gig is no longer available (boo!). But a wig-flipping blast through Bråtebrann is still online to watch (hooray!)

No one has served up quality quarantine entertainment like Metallica. As well as their regular Metallica Mondays series, the metal icons jammed out this stripped-back lockdown version of …And Justice For All opener Blackened. The campaign for a Metallica: Unplugged album starts here.

Give Alter Bridge/Slash singer Myles Kennedy an acoustic guitar and he's a very happy man. Which is just as well, considering things like touring, bar-hoppiing and seeing other carbon-based life forms has been off the menu for weeks. Luckily American Songwriter magazine dragged him away from watching Friends re-runs on Netflix to partake in its regular Behind The Mic series. And thank the Great Cthulhu they did.

Finnish psychedelic shamen Oranssi Pazuzu planned to play their new album Mestarin Kynsi in its entirety at this year’s Roadburn, but when the festival was cancelled they decided to perform it isolation via YouTube instead. Definitely the darkest stream you’ll watch this year.

UK prog metallers TesseracT convened virtually in five different locations and three different countries to record a live session based around 2018's Sonder album. The whole session was mixed and mastered by guitarist Acle Kahney. Well done Acle. Treat yourself to a biscuit.

Canadian prog-metal maverick Devin Townsend launched his Quarantine Concerts series early in the lockdown period to “provide some relief during these coming times” and raise funds for medical services around the world, which makes him an utter hero in our eyes. All three Quarantine Concerts are available to watch on YouTube.

If you’re thinking, ‘What the world needs right now is a little immaculately coiffured Satanic doo-wop’, then you’re in luck. Twin Temple – the planet’s finest purveyors of Immaculately coiffured Satanic doo-wop – have majicked up some of the very same. Isolation-friendly versions of Lucifer My Love, The Devil Didn’t Make Me Do It and Lucifer My Love can all be conjured up at midnight while wearing nothing but a hollowed-out goat’s head and virgin-skin robes. Failing that, they’re on YouTube.