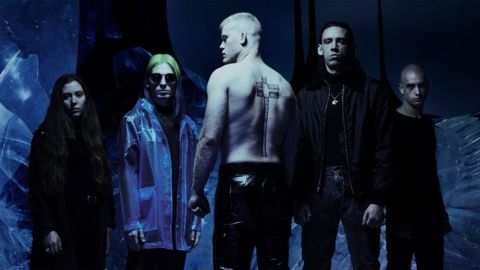 Back in 2017 when Code Orange dropped third album, Forever, they were just another underground hardcore band. Now they are Grammy nominated, have toured with just about every big name in metal, have the patronage of a WWE superstar and are one of the most polarising acts on the planet – all because of that headfuck of a record.

Impressive, but you get the feeling that the really hard work starts now for the Pennsylvanian quintet. Underneath will be judged against that high bar, whilst having every hardcore purist or metalhead that couldn’t understand the hype sharpening their knives. That’s a pressure 99.99% of bands would crumble under. Underneath is the sound of the 0.01%.

From the moment the electronic creep of 74-second-long opener (deeperthanbefore) merges into Swallowing The Rabbit Whole, it’s clear the band have no intention of resting on their collective laurels. Deeply dark, sickeningly heavy, and with an eerie piano tone that occasionally peers out from the background, it’s a stunning opening to the record.

What’s also instantly apparent is the production style. Drummer/vocalist Jami Morgan enlisted Nick Raskulinecz and Will Yip to assist him with the sonic tapestry, and the results are startling. The sound has more in common with cutting edge hip hop artists like clipping. or JPEGMAFIA, but is merged with classic early 90s like bands like Type O Negative, Life Of Agony and Sepultura.

It’s a mouthwatering aural feast. On this evidence, though, ‘hardcore’ might not be an accurate description of Code Orange anymore. How many hardcore bands could incorporate gothic melody and passages of grungy guitar like they do on Sulfur Surrounding, or channel Atari Teenage Riot’s digital white noise in the modern age like the migraine-inducing Back Inside The Glass?

Hardcore has been in fine creative form of late – pretty much since Forever came out, actually – but you can’t imagine any of Code Orange’s peers from the last few years writing either a song that strikes so many blows from so many angles as Last Ones Left, or one that drips with the throbbing, Reznor-esque menace of The Easy Way.

No, not you, Knocked Loose… nice try, Vein… close but no cigar, Jesus Piece; not only does Underneath offer more tempo and stylistic shifts than all of these bands put together, but Code Orange seem to have total command of whatever form of alternative and underground music they try their hand at. They don’t belong in this category anymore; they belong on their own because, put simply, no one else sounds like this.

It’s not always easy to define a ‘perfect’ record, but you have to ask yourself what you want from a heavy band in 2020. Innovation? Ambition? Power? Something anthemic? Something that stops heavy music from chasing its tail and genuinely moves it forward? If the answer to all and any of those is yes, then this is perfection personified.

If Forever was Pretty Hate Machine then Underneath is very much The Downward Spiral – a 1,000 ft neon signpost for the rest of the metal world to follow, the first classic record of the decade, and one that confirms Code Orange’s position as the best band on planet Earth right now. Welcome to the future.

Underneath is out now and available to order, with bundles and four limited edition vinyl colourways, each featuring a gatefold jacket with a lenticular cover, also available.

Code Orange claim the throne as the supreme rulers of 21st century hardcore with their sophomore album Underneath.View Deal