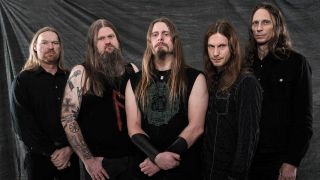 In a world where we’re constantly fretting about the ability of younger bands to remain enduringly creative, the likes of Norway’s Enslaved, with 25 years of history and 13 albums to their name, could teach us all a thing or two. For their towering frontman, bassist/vocalist Grutle Kjellson, the secret is simple. “Make music for yourself,” he shrugs. “If it sounds good, then keep it. And don’t be a dick! Ha ha ha!”

Enslaved have carved a fascinating path, starting from primal black metal roots in the subgenre’s classic early-90s period, and reaching, by way of a spiritual embrace of ancient Norse culture, progressive compositions of cosmic profundity that with each release continue to redefine what extreme music is capable of. This March, they celebrate their 25th anniversary with three commemorative shows in London, each covering a period of the band’s history. This is no dewy-eyed nostalgia from a band past their prime, but a waypoint. Their creativity only continues to increase, along with the size of their fanbase.

Upon sitting down with Grutle and fellow founding member/guitarist Ivar Bjørnson, friends who formed Enslaved in their teens, and who remain the band’s core creative duo, Hammer’s first question has to be: how the hell do you do it?

Grutle, stoic but wry, takes the lead. “Maybe it’s because we change, at least in some way, from album to album. It’s really down to a simple philosophy, I think; we’ve always tried to evolve.”

Ivar, softly spoken and earnest, concurs. “Having something as simple as that makes it easier. There’s never a question of why we’re doing it.”

“We like to check out different genres and be inspired,” adds Grutle. “If something we make sounds like something we’ve done before, we throw it away. Creating music is about making something interesting for yourself. If you’re trying to construct something to suit others, it’s not music – it becomes some sort of industry. It’s a cliché, but it’s supposed to be heartfelt.”

They lament how some young bands treat music as a business, and in doing so, lose something of the naivety that can lead to creative magic. Ivar reminisces of days gone by; when the band were reckless, full of self-belief. “The studio we recorded [1994 sophomore album] Frost in still has the record’s production sheet on the wall, because it shows that as long as you believe in your visions, you can take it quite far,” he states, proudly. “As we’ve progressed, the band’s popularity has grown immensely. The only thing that has gone downwards is the monetary income, and that’s the same for everyone. I’m not saying it’s ideal, but we feel more motivated, because I think we’re in it for the right reasons: for the love of doing it.”

It’s a simple, invaluable message. Affirms Grutle: “It seems younger bands have this expectation hanging over them – especially if they record a successful debut. Most of them walk into the trap of trying to recreate it. On their first, they’re unafraid to be original, but on the second, they play safe. Trying to copy something, another band – or even worse, yourself – is a trap you don’t want to get into. You’re on thin ice trying to construct music for the masses.”

It’s wormhole thinking – we feel connected to all

Grutle ponders for a moment before adding: “I fancy a lot of second albums by bands, actually – albums that lots of people hate. The experimental albums. People hated Motörhead’s Another Perfect Day when it came out [in 1983]; I think it’s one of the most brilliant albums they’ve ever made.

It’s an interesting afterthought, comparable to the rejection that the band faced from black metal’s orthodoxy as the distance between them increased. Instead of worrying about the opinions of those who fight to preserve that sound, Ivar remains generous. “I think they’re performing a very important duty, because so much of metal is born from friction; there’s still got to be some of us that sneak off and toast our marshmallows in the original flame, just for fun!”

As writers they are always pushing, be it in their forward-thinking spatial expanses that coalesce through the clash of melodic light and grating darkness, or in the yearning spirituality manifest in Grutle’s ageless vocal rasp, piercing aeons past to waken the Norse gods. Theirs is a truly absorbing musical journey, transcending time to say something about the human condition – past, present and future. “It’s wormhole thinking,” expands Ivar. “There’s a quantum presence in Enslaved – we feel connected to all – in all times at the same time.”

The spiritual aspect of the band explains why they are tying their 25th anniversary concerts in with Skuggsjá, meaning ‘reflection’, a piece of music alongside a series of performances, art installations and workshops that celebrate the pre-Christian culture of their homeland, which was infantilised by Christian conquerors in an attempt to neutralise its threat. Reasserting the worth of those old tales is something that is very important to them, as Grutle explains.

“Our lyrics have never been about dragons and horned helmets,” he says, derisively. “In my point of view, all those gods and deities represent forces within the human body and mind, the micro cosmos, and you can find parallels in the wider universe.” And what role does Skuggsjá play in affirming that? “The first show we had was the 200-year anniversary celebration of the Norwegian constitution [in 2013]. Ivar and Einar [Selvik, of Wardruna] were invited to write the piece. It’s ironic because it’s very hostile to many aspects of the constitution! It’s very much against the way Norway was Christianised. It’s not that different from what’s going on around us today; personal ambition hiding behind monotheistic mumbo jumbo.”

It’s perhaps an adherence to the spiritual aspects of the band, and not to a specific musical genre, that has kept them so open to innovation, and to so many diverse collaborations. “They really opened a few doors for us,” believes Grutle. “I remember when people saw Trinacria [his and Ivar’s experimental black metal/noise project] live; we played Inferno festival [in 2007]. A lot of metalheads really hated it! We collaborated with this female noise duo [Fe-Mail]. They felt like it was a fist in the face of some puritanical black metallers. It’s good; we challenged them. I remember after the show I went down to breakfast at the hotel. The drummer of Trinacria was sat at a table with some Swedish black metal fans. They had no idea who he was, and they said, ‘Did you hear that Enslaved project last night? Oh that was awful! It was fucking terrible!’ I turn up 30 seconds after, sit down, and those guys just ran away! I was like, ‘What the fuck happened?!’ The drummer was laughing. I hoped I’d meet them again!”

The creative relationship between Grutle and Ivar continues to prove fruitful. Some bands with this much history have needed counsellors to resolve their disputes, and would doubtless find the secret to sustaining such stability invaluable.

“It’s a brotherly thing that has grown over the years,” says Grutle. “We have developed a clever way of collaborating, because we know when not to step on each other’s toes. It’s a key to our longevity.”

Ivar picks up there. “Early on we got rid of the notion that Enslaved would be the same without either of us. It’s an intertwined thing. I’ve learned that I have a psychedelic approach to things; Grutle’s analytical approach keeps it from falling into chaos!”

A shining example for other artists to seek their own path, when Ivar looks back down theirs, he sees duality. “There’s lightness to it in the sense that we incorporate things that surprise even us, but there’s also a deeper stress factor. There’s an amount of time that the band gets to exist, because there’s only a fixed amount of time that you’re alive! There’s so much to explore, and for us that’s the modus operandi, seeing where the band can go in the time we’ve got left.”

It’s inspiring to talk to a band with 25 years of history and four Norwegian Grammys to their name and hear them say there’s so much left to do. “That’s how it feels from this side,” says Ivar. “It’s infinite inspiration. The only finite thing is time.”

Looking back brings things into focus for the pair. “Things are very different now,” reflects Ivar. “We look different, we have got some family, I’ve got two kids. When we started I was still pretty much a kid myself.”

For Grutle, it’s their first steps that he holds dear. “When I hold in my hands our first-ever official release, the Hordanes Land mini LP from 1993, it still feels great,” he says.

For Ivar, it’s the memory of his early motivations that makes him realise what they have. “The image I have of Enslaved is that moment when we get ready for a show. Everything’s perfect, and at those times I remember thinking as a kid, ‘What do I want to be doing for the rest of my life?’ And this is it.”

It’s a poignant image of a band who have relied upon passion and curiosity for sustenance. It has carried them far, and will carry them further yet.

Grutle: “I was never a fan of grunge, and probably my one and only grunge album is Lobotomizer, the debut of Norway’s Motorpsycho. They’ve developed in so many directions I’ve lost count. Like with their debut, they don’t always hit me, but when they do, there is nothing better! An honest, fantastic band.”
Ivar: “I’m constantly baffled over how well hidden a secret Motorpsycho are. They have gone through the most prolific evolution of their sound. Check them out, it’s never too late!”

Ivar: “Ulver’s excellent Bergtatt promo [released in 1995] made them stand out, but I kind of forgot about them until opener Lost In Moments from [2001’s] Perdition City hit me like a ton of urban electronic bricks. Truly one of the most exciting and wondrous transformations – or ‘becomings’, in serial-killer lingo – witnessed in the music world.”
Grutle: “Ulver prove the most that the first demo tape isn’t always the best one! Their first attempts are charming enough, but their most significant work is without doubt from the last decade. I love their genre-jumping.”

Ivar: “I’m one happy Opeth fan, and the changes they’ve gone through have been a blueprint of my own taste. They’re one of my biggest inspirations in terms of heart-following in all your endeavours.”
Grutle: “I like it when bands have this extreme urge to evolve, create and don’t give a flying fuck about expectations. They’re a great live band, too!”