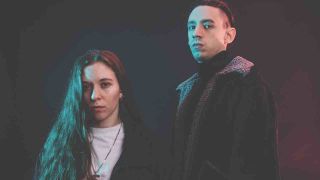 It’s just ticked past 9am in the London offices of Warner Music. Code Orange’s drummer and main vocalist, Jami Morgan, has only been in the building for a minute, but already he’s wandered off to take a selfie. He grins as he holds up his phone and snaps himself in front of a picture of motormouth ex-Oasis-frontman-turned-solo-artist, Liam Gallagher. Then he turns back to our party, which includes his far sleepier and more reserved bandmate, Reba Meyers, and declares: “Okay, we can start now. I just needed to get a picture with my boy.”

The hardcore musician and the Britpop icon might seem an odd pairing, but there are similarities. Both have combative personalities. Neither give a fuck what you think. And they’ve both marked a sea change in music.

Code Orange, you see, are a band who have amassed quite a reputation. Back at the start of 2017, they were just one of many hardcore bands who were working their way up the ladder. Having signed to Roadrunner Records following the release of promising second album I Am King, they dropped a musical neutron bomb on heavy music with its successor, the critically acclaimed Forever – one of the most ambitious and superbly well realised hardcore albums… well… ever.

The buzz around Forever saw the band grow and grow; there were tours with System Of A Down, a slot on the Metal Hammer Tour as main support to Trivium, the creation of a theme song for WWE Superstar Bray Wyatt and, perhaps most surprisingly, a Grammy nomination for Best Metal Performance in 2018. Pretty incredible stuff, right?

“Sure,” shrugs vocalist and guitarist Reba when we put it to the pair in the plush office where the band are doing interviews all day. “We’ve moved on now, though. None of us really think about any of that stuff anymore.”

“I’m not sure I’ll ever be satisfied,” picks up Jami. “It’s cool, and all the stuff that happened to us on the last record was great, but we’re all in a totally different headspace now. We’re just predisposed to always try to go further; we have to aim to better everything, every time. No one in this band is going to just settle. If I couldn’t guarantee we could top that record, I wouldn’t be sitting talking to you now.”

This work ethic may explain the three-year gap between Forever and their new album, Underneath. Last summer they were due to head out on a European run, including a highly anticipated slot as guests to Parkway Drive at Bloodstock Festival, but cancelled it to concentrate on writing and recording. It left plenty of fans disappointed, but Jami insists there was no way around it.

“We just worked on it, and worked on it, and worked on it – it was a 24-hour-a-day obsession for us for about two years,” he explains. “There was just no way that we could have stopped. We’re lucky enough to be able to call making music a job – there are some people that have to work hard at jobs they don’t care about – so while we’re here, we are going to have that work ethic as an absolute minimum. I hope people understand that; I think they will when they hear it. We wanted to do the show and we love and respect that festival, but this record needed to be right.”

Luckily, Underneath is an absolute world beater. Code Orange take their extreme hardcore parts and make them heavier and more metallic, add a dose of modern hip hop’s ADHD abandon and a dollop of electronic, experimental white noise (aided by Nine Inch Nail’s Chris Vrenna) – and somehow manage to get the mix so right that it sounds utterly cohesive and completely genre-less. It’s destined to be one of the most talked-about and influential pieces of music of our scene.

“We actually made the album, and we were happy with it, and then scrapped it,” laughs Jami. “It sounded great and I think most bands would have put it out, but I insisted we do it again. ‘Let’s do it again and make it sound better!’ Some people thought I was crazy.”

“It was a real challenge for me,” adds Reba. “Because I had to learn how to use my instrument in a totally different way, because it needed to sound how it sounds in his head. I love all types of music, and I loved being able to approach the guitar as if it was an instrument in electronic music, but it was very hard work.”

“The attitude is always, ‘Do your best… then do it again better,” Jami nods in agreement.

For this reason, Jami has now stepped out from behind the drumkit to become the frontman proper – they revealed the move in the video for Swallowing The Rabbit Whole.

“At our last show we did before we went to record the album, I actually said onstage: ‘This is the last time you’re going to be seeing this.’ It was Shade [Eric Balderose, guitars and programming] who really pushed me towards it – we thought maybe it would be easier for me to connect out front. Plus, the drum parts and the vocal melodies are really challenging on their own now. Trying to do them together means something could give, we might lose a couple of per cent, and we don’t want that.”

Reba and Jami have a Yin and Yang energy. We can see ambition oozing from the pair, although it’s channelled very differently. While Reba is quiet, often intense, and incredibly thoughtful and deliberate when answering our questions, Jami is the archetypical band leader. He talks at length about his designs for Code Orange, overflowing with passion and emotion, gesticulating wildly as he tries to explain the vision he has. He’s akin to the conductor of an orchestra – a cajoling, directing, motivating presence.

“I drive them fucking mad!” he says. “Because I’m no musician, I just have a sound in my head and a theme and a concept, and I want that! I explain a lot of stuff through emotions, physical gestures, colours and scenes from films. She has a lot more patience with me, but Shade just constantly asks me what the fuck I’m talking about.”

“I actually find that way of working really helpful,” Reba chips in. “Because if your focus and reference for a piece of music is non-musical, then you’re more likely to find something unique from it. I’m not sure a lot of other bands do that.”

Underneath is set in a future society where the lines between reality and our self-created online personas have blurred. “It’s about the fact that we have this little thing just sitting in our pocket that pumps so much information at us all the time and allows you to just be whatever you want,” Jami says. “It’s not about technology in a Fear Factory ‘Machines are taking over’ kind of way, but more like, ‘Are we even going to be able to tell who we truly are? Does anyone actually know that now?’”

You get the feeling Jami Morgan knows exactly who he is: often blunt, outspoken and utterly convinced about the quality of his own band. He has previously expressed disappointment about today’s heavy music scene and positioned Code Orange as its innovators and saviours, which some people have seen as arrogant.

“I’ve had those moments where I was pissed off about what people were saying about us,” he says. “I would look at other bands and think, ‘Why aren’t we on that tour?’ ‘Why is everyone talking about them?’ ‘We’re doing something so far beyond what that band are doing!’ but that’s the past now. No band that I ever really loved ever gave a fuck about what anyone else or what anyone thought of them. If we upset a few people with what I say…”

He shrugs his shoulders. You have to wonder what the more placid Reba thinks when Jami says something controversial. “I totally back him,” she fires back. “He’ll usually run everything past all of us anyway. We know and agree with what he is about to say.”

“This band is a brotherhood,” Jami adds, though he won’t reveal who their new drummer is yet. “You might not believe it, but it’s a total democracy, and everyone has their say in the sound and the look and the way that we present ourselves. We don’t do anything unless we’re all happy; we’ve grown up together, we’ve been playing together since we were kids, we’re best friends as well as a band. I think people overlook that a lot.”

We’re now living in post-Forever world, where musicians are copying Code Orange’s style and there are increasing opportunities for hardcore bands. But Jami, Reba and co remain ahead of the game. Are they worried this album won’t be understood?

“A little,” says Jami, “But they’ll get it. There will be people that understand it, and the ones that don’t, it might just take them a little while – it’s a hell of a lot to take in. It could be years later and they finally make it click, or they could just not get it at all and think it sucks and then… well, fuck them, they’re wrong!”

Jami Morgan might be lots of things but, in this instance, he’s definitely not wrong. If all goes to plan, Liam Gallagher’s picture might soon have some likeminded company hanging next to him on that wall.