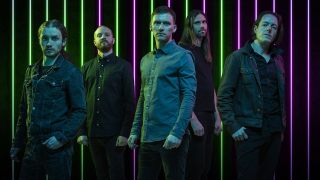 Tesseract have shared an audio video for the album version of their track Smile.

They revealed the single version of the song in June last year, with the extended version set to appear on their new record Sonder, which will launch on Friday (April 20) via Kscope.

Speaking in a new interview with Metal Hammer about the follow-up to 2015’s Polaris, guitarist James Monteith says: “It’s the next one in the evolution.

“I think there are a few nods back to the early sound with some of the heavier riffs, but there are also a few nods to  the second album, Altered State, in terms of the atmospherics.

“But I think it’s still its own thing that’s continued its evolution of the sound.”

Sonder will be released on CD, LP, clear vinyl, picture disc and via digital platforms, while a 2CD version will come with a binaural album bonus disc, which will provide a 360-listening experience specifically designed for headphones.

They’ll head out on tour across North America later this week, and will return to Europe this summer which includes a set at the UK’s Download festival. The band also have a run of dates scheduled in Australia.