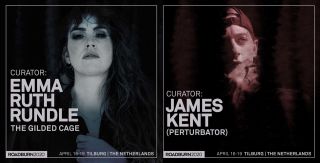 Roadburn festival have announced death gospel forerunner Emma Ruth Rundle and dark synth artist James Kent as next year's curators, a role that has previously been held by the likes of Converge's Jacob Bannon and At The Gates' Tomas Lindberg.

Emma Ruth Rundle has played at the festival previously, back in 2017 and promises to champion many insatiable appetite for discovery will see her pick bold emerging bands who are reinvigorating genres as well as hand-picking artists that have helped shape her as a musician.

“As co-curator I hope to honor Roadburn’s legacy, and our community, by bringing artists to the festival – both new and established – who are creating important work," Rundle explains.

"Craft that is pushing what it means to be part of the heavy music world and pulling with them some real emotional weight.

"While the genres may vary, each artist will be coming to the festival because of their ability to elicit a visceral and emotional reaction in my heart, and hopefully yours too.

"I’m excited to share this experience with the most unique and dedicated people who make up the Roadburn family.”

More information on Emma’s curation, titled The Gilded Cage, will be available in the coming months.

Emma will be sharing the role with electronic artist Perturbator, aka James Kent, who straddles both metal and electronic audiences with dark synth and also played the festival in 2017.

"Roadburn has been for many years to me the most interesting festival when it comes to metal and alternative music in general," Kent comments.

"Always in good taste, an open mind and an eye for new ideas, it is obvious that the people behind it are extremely passionate about bringing the best acts out there.

"That is why it is truly an immense honour for me to be the next Roadburn curator and I intend to keep to the tradition of inviting artists that will fascinate.”

Kent will also join forces with Cult of Luna’s Johannes Persson for a commissioned performance that will form something of a grand centre-piece.

The Dutch festival has made a name for itself by showcasing the most forward thinking artists and musicians within the world of heavy music, with Roadburn 2020's poster designed by Dutch artist, Douwe Dijkstra and further performances by the likes of Jo Quail, Vile Creature and Bismuth and Julie Christmas it promises to be particularly "weird, dark and wild".

Tickets will be on sale on Tuesday September 24 and available from here.