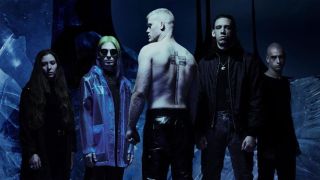 On Saturday, Code Orange played a show in their home town of Pittsburgh in an empty theatre due to the coronavirus pandemic.

The band had been planning the show to mark the launch of their new studio album Underneath for months, but when the Roxian Theatre decided to reschedule all previously booked concerts, it looked as if Code Orange would be denied the chance to celebrate Underneath’s release.

But on Friday, the band announced the show would go on – albeit without any fans in the theatre, with Code Orange streaming the set live on Twitch.

And if you missed it or want to relive the performance, you’re in luck, as it’s available to watch below.

Code Orange say: “Not bad for a first gig huh? Just like you all, we will not go out quietly. Thank you for the support and the most positivity we’ve ever received. Hopefully this can help open up some doors for the music world right now.

“As for us, this is day one. A new era has just begun. See you very soon.”

Code Orange will reschedule the show and have urged fans to hold on to their tickets. Further details will be released in due course.

In Metal Hammer magazine's review of Underneath, we gave in 10/10 and called it "the greatest metal record in a generation."

Keep up to date with all the latest news on tour and show postponements and cancellations due to coronavirus on Louder’s dedicated hub page. This will be updated regularly with news as we get it.

Code Orange: Underneath
Code Orange are back with their fourth studio album Underneath. The follow-up to 2017's Forever features the singles Swallowing The Rabbit Whole and Sulfur Surrounding.View Deal